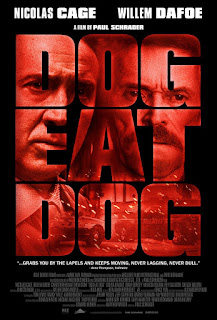 DOG EAT DOG starts out as a gloriously over the top bit of filmmaking. Alternating between oversaturated phantasmagorical color and noirish black and white, and featuring two brutal murders that jarringly shift the film's tone from black humor to black hearted.

Plotwise, DOG is a fairly typical crime story. Nicholas Cage, who has the lead role as Troy, is the brains of a trio of unhinged criminals. He and his two partners, the aptly named Mad Dog (Willem Dafoe) and the big but smart (or so we're told) Diesel (Christopher Matthew Cook), find criminal employment after serving time together doing jobs for "El Greco" (Paul Schrader, also the film's director).

Their first gig, convincing local drug dealer Moon Man (Omar J. Dorsey) to give up his private stash of drugs and money, goes more-or-less as planned.

After the success of that first job, the gang are offered a bigger caper: kidnapping the 1 year old child of a guy who owes money to the wrong person, and doesn't want to pay up. They agree that there are only 2 options: either victory, or they all go down together.

When they go to pull off the job, however, the trio encounters unforeseen problems. It all leads to an ending that seems to be a commentary on police violence, in particular recalling the Michael Brelo case. But it's an ending that feels unearned and forced, and you're ultimately left wondering why you just spent 90 minutes with these characters.

The screenplay by Matthew Wilder is based on a novel by Edward Bunker , but it's the direction by Schrader that gives the film what interest and character it has. He's clearly having fun playing with different visual styles while pushing his actors to go as far as they can.

The tone is somewhere between a Coen Brothers quirky crime pic like BLOOD SIMPLE or RAISING ARIZONA, and the more disconcerting black humor of something like William Friedkin's KILLER JOE. There are some entertaining aspects of the film, mostly near the beginning, and the performances of the three leads are fine, but that's not nearly enough to recommend it as a whole.

It also bears mentioning for Cleveland Movie Blog readers that DOG EAT DOG is not only filmed in Cleveland and the surrounding environs, but set there as well. The familiar scenery will probably add some interest for locals, but not much. 2 out of 4 stars.
Posted by Bob Ignizio at 12:00 AM