Do Not Resist (November 17th and 18th at the Cleveland Cinematheque)


[DO NOT RESIST screens Thursday November 17th at 6:45pm and Friday November 18th at 7:30 pm at the Cleveland Cinematheque.] 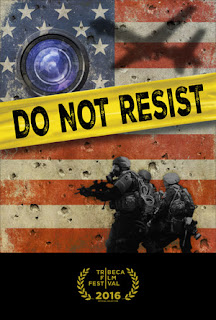 In case you hadn't heard, quite a few unarmed people of color have been killed by police officers under controversial circumstances in the past few years. This has at times led to protests and/or riots depending on how you want to label things. These acts of civil disobedience have, in turn, often resulted in a strong response by law enforcement. And often, the response to these protests/riots has been so massive that it has led to further criticism of law enforcement for being too militarized. And, as the new documentary DO NOT RESIST shows, overzealous and overwhelming methods of dealing with crime are not only used in situations like protests/riots, but all too often in everyday policing, and often in areas where violent crime is almost nonexistent.

Rather than trot out the usual parade of experts to tell us all how this has happened and how we should feel about it, DO NOT RESIST takes a fly on the wall approach. We see the protests/riots in Ferguson, Missouri in the wake of Michael Brown's fatal shooting by a police officer. We sit in on a city council meeting where a small town decides whether or not to a BearCat armored military vehicle free from the government. We see police training sessions in which officers are told that the sex they have after taking out a perpetrator will be the best sex they've ever had. We see a full on military style SWAT raid on a home of an alleged drug dealer that results in excessive property damage and the terrorizing of an unarmed family, all to turn up a negligible amount of marijuana in one man's book bag. And we hear recent election celebrity and FBI director James Comey defend the notion of the "warrior cop" at a law enforcement convention.

These and other vignettes are offered without commentary, but they speak for themselves just fine.

Of course, even without interviews or narration to spin what we see, there's no doubt that director Craig Atkinson has a point of view he's trying to put across. That he does in powerful and immediate fashion. And while it's a given he won't sway everyone who sees the film, he certainly presents a compelling argument that those who are supposed to "serve and protect" are being pushed by current trends in policing towards behaving like an occupying force. 4 out of 4 stars.
Posted by Bob Ignizio at 9:54 AM