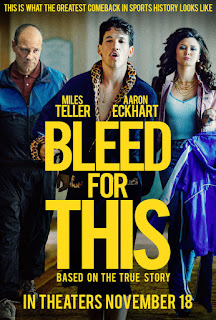 Maybe the world doesn't need another boxing movie, but the “sweet science of bruising” has provided enough energy, velocity and melodrama for hundreds of films. The newest, BLEED FOR THIS, is based on the true story of Vinny Pazienza (Vinny Paz), a professional boxer from Rhode Island who held world titles in three weight classes. Ben Younger wrote and directed the film.

In 1991, shortly after he won the junior middleweight world title, Pazienza was in a car accident that left him with a broken neck. Doctors told him he could not fight again, and that he might not even walk again, but Pazienza was determined to continue fighting. Refusing spinal fusion surgery, he agreed to wear a metal brace called a Halo, which was screwed to his skull for three months (six months in the film). During that time, he pursued a workout regimen against doctors' advice, and returned to the ring victorious, a mere thirteen months after the accident that nearly crippled him. His triumph is considered one of the greatest comebacks in boxing history.


Miles Teller plays Vinny, the upstart fighter enjoying the fame and perks of his rising career — high-dollar Vegas matches, strip clubs, gambling, gold chains, hot girlfriends. He's cocky, striding in late for a pre-match weigh-in at Caesar's Palace wearing nothing but a leopard-print thong. Vinny has to go to great measures to make weight in his junior welterweight division; after a bloody knockout defeat to Floyd Mayweather, he is rushed to the hospital with dehydration. His father, Lou (Ciáran Hinds), his manager and his trainer, Lou Duva (Ted Levine), advise him to give up boxing. He refuses. “Give me another shot. Just one more.”

Vinny is sent to Catskill, New York to train with Kevin Rooney, who famously trained Mike Tyson. Rooney, played by Aaron Eckhart with a paunch and receding hairline, is a serious alcoholic but a first-class trainer who urges Vinny to move to the junior middleweight division. This proves a good move, as he wins the WBA World Title, defeating World Jr. Middleweight Champion Gilbert Dele with a second-round knockout. (The movie compresses his fight history somewhat; Pazienza's first fight in the junior middleweight division was a USBA Championship bout against Ron Amundsen.)

The thrill of victory is short-lived. One afternoon, a car Vinny is riding in, driven by a friend, is hit head-on, and the film becomes a story of arduous recovery. Forced to wear the cumbersome metal Halo and lie day and night in a Craftmatic bed in his parents' living room, Vinny begins to despair. No one believes he will ever fight again, and at a surprise birthday party given by his family and friends, Vinny complains, “I'm sick of people talking about me like I'm dead.” He rejects the available options. “Train kids at the gym? Talk about how I used to be a fighter?” No, he says. “This is what I do.”

Determined to get back in the ring, Vinny persuades the reluctant Rooney to help him train in his family's basement. The pair take elaborate measures to conceal their efforts from his worried parents. Rooney warns that he's risking his life for “a Hail Mary at best.” But Vinny says, “It's time to roll the dice.”

The return to the ring of the “Pazmanian Devil” is not easy; no boxer will agree to fight him. “No one wants to be the one who sends you back to the hospital,” his dad tells him. But this obstacle, too, is overcome. The real Vinny Paz defeated Luis Santana in his first fight after the accident; the movie goes directly to his bruising 12-round bout with Roberto “Hands of Stone” Duran.

The inspirational tale of grit and determination overcoming diversity is old-fashioned at its core, but the style is exciting. Larken Seiple's cinematography conveys the glitz and glamor of Vinny's high life, the gray gloom of his health struggles, and the fervor of the fights. Zachary Stuart-Pontier's kinetic editing, alongside a raucous soundtrack of classic hard rock and blues, make for an exciting, high-velocity experience.

The story has many unpersuasive and unsatisfying elements. Vinny's recovery seems easier than it must actually have been, and the real Vinny Paz's character has been sanitized (Paz has had multiple arrests for DUI and domestic violence). The lack of fully written women's roles and the parade of strippers, ring girls and topless girlfriends suggests this is a movie made with men in mind.

Even for a boxing film, it's not particularly original, borrowing much from, for instance, David O. Russell's THE FIGHTER, particularly the characterization of Vinny's raucous, tight-knit Italian family — scenes of his sisters crowded together on the couch in Providence cheering Vinny's televised matches, while Mom (Katey Sagal, seriously underused) prays before her candle- and icon-filled altar. The influence of Martin “RAGING BULL” Scorsese, an executive producer of this movie, is also felt.

But it hardly matters, to me at least, if it breaks new ground. It's an enjoyable, energetic piece with good performances, zesty production values and a useful message about the power of persistence. 3 out of 4 stars.
Posted by Pamela Zoslov at 12:01 AM