The World Series pales in comparison to what's at GhoulardiFest, Oct. 28-30 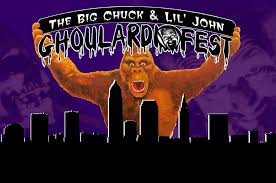 From 1963 to 1966 Anderson would don a garishly phony goatee and Fu Manchu mustache and spice up B-grade horror and sci-fi flicks for insomniac viewers in beatnik-comic fashion. The silver-tongued announcer, unrecognizable in his fright-wig disguise, would do blackout comedy bits (some including a young sidekick named Tim Conway), sound effects, songs and the catchphrases. "Turn blue!" "Stay sick!" "Ovaday!" "Dorrrothy..."

Ernie Anderson left Cleveland to find national renown in Los Angeles as an ABC-TV announcer (he also put out a series of classic audio comedy LPs with Tim Conway, and one of his sons out west would mature into world-class filmmaker Paul Thomas Anderson). But he left a secret stash of himself behind in Cleveland that, like a ticking time capsule or Dr. Phibes, rises again in 2016 to haunt this Halloween weekend Ghoulardifest.

The story goes that Anderson had a notion to try acting. It was not unheard-of for TV horror hosts to go on to make movies - look at Maila "Vampira" Nurmi and her infamous work with Ed Wood, or Sid Noel in New Orleans starring in THE WACKY WORLD OF DOCTOR MORGUS, the very first horror-host feature film.

But Anderson's film wasn't even that high-profile. Entitled TOO LATE TO PRAY, it was commenced by TV cameraman Ralph Mayer and his wife Gypsie, and wrapped principle photography in 1967. The effort found Anderson cast as an escapee from Alcatraz prison who winds up a religious figure among San Francisco hippies. By the few surviving accounts, the unfinished project was a bit...strange.

But now, after all these years (and Ernie Anderson's 1997 death), the long-mothballed footage of TOO LATE TO PRAY has been edited together (which is more than can be said of some of Orson Welles' late-career projects, pretty scary to think about). It will screen at the 2016 Ghoulardifest - the ultimate take-home Ghoulardi souvenir.

Admission is $15 at the door for adults, with a $30 weekend pass. Children under 12 are admitted free (yes, indoctrinate them when they're young). For more information go to www.ghoulardifest.com.
Posted by Charles Cassady Jr. at 11:56 PM