[NEITHER HEAVEN NOR EARTH screens Thursday October 6th at 6:45 pm and Sunday October 9th at 8:20 pm at the Cleveland Cinematheque.] 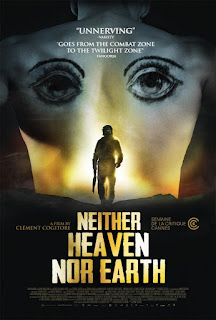 NEITHER HEAVEN NOR EARTH shares some commonalities with the horror genre – something eerily supernatural is going on, and the cast spends much of the film in a state of fear. But the film doesn't seem especially concerned with creating fear or disgust in its audience so much as it wants us to ponder its mysteries. Mysteries which ultimately remain unanswered.

The plot is that a group of French soldiers are stationed outside a small village in Afghanistan. As we often seen in films about the Afghanistan and/or Iraq war, the western soldiers have as hard a time understanding and winning over everyday villagers as they do fighting the enemy.

In this case, when a local boy wanders into army territory with his goat, the soldiers fire warning shots that indirectly result in the goat's death. The village leader wants payment for this. Captain Antares (Jeremie Renier), leader of the soldiers, refuses.

Later, back at their base, the men watch the nighttime landscape with night vision goggles. By morning, two soldiers have inexplicably disappeared. Could the villagers be responsible? Unlikely. Maybe the Taliban forces led by "Sultan" that Antares and his men were supposed to track down? That turns out to be unlikely, as well. In fact, as more of Antares' men disappear, Sultan turns up trying to negotiate for the return of his own missing men, leading to a strange alliance between enemies as they try to figure out where everyone has gone to.

At some point we hear a village legend. The area near where the soldiers are stationed is "Allah's Land". The legend states that people may pass freely through the land, but if they fall asleep there, Allah will take them. This leads the soldiers to do the Freddy Kreuger thing and try to stay awake. Naturally sleep deprivation takes a toll, and nerves get frazzled.

The feature directorial debut of Clément Cogitore, NEITHER HEAVEN NOR EARTH (known in other territories under the title: The Wakhan Front) does a great job at building tension and creating atmosphere and a sense of mystery, even as it addresses many of the usual issues found in other films about these two seemingly endless wars. That it never quite reaches a climax is both disappointing, and yet in some ways the point. 3 1/2 out of 4 stars.
Posted by Bob Ignizio at 12:00 AM