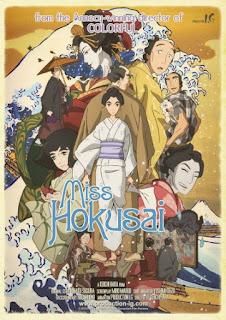 Artists are pretty self-centered and borderline-dislikable people. Kind of a-holes, once you really get down to it. Consider the Japanese printmaker and draftsman Katsushika Hokusai (1760-1849). Among his most famous works is the iconic The Great Wave. We’ve all seen it. Now, back several years ago when one of my books on Great Lakes paranormal phenomena came out, I campaigned for the old Cleveland Free Times newspaper (it still existed then) to run an excerpt, my disquisition on the Lake Erie Monster. Editor Frank Lewis agreed…but that wasn’t enough for me. Even though I hadn’t drawn with pen and ink for decades, I sat down and for days and days did a painstaking takeoff on Hokusai’s Great Wave just to illustrate my Free Times book excerpt. I reproduced Hokusai’s wave, all right, but to give it the proper Cleveland twist I included the Lake Erie Monster (as a Chinese dragon), two floating drums of toxic waste, dead fish, and a homely and fat chainsmoking Japanese mermaid in a LeBron jersey.

When Frank Lewis – who probably had no idea I could draw – got the thing in the mail, he said it was the damndest thing he ever beheld. Here’s the weird part, though: I never knew if the drawing ran. The Lake Erie Monster article did, oh yes – it was findable online while the Free Times still existed. But in all the years I wrote for the paper, that was the one issue of which I could not locate one printed copy on the street.

What does this all have to do with artists being self-centered a-holes. Well, this review is supposed to be about a wonderful and offbeat new movie about Hokusai. But I’ve just gone on rambling about myself. And how I did a Hokusai takeoff. Hence, for a while here I am an artist. And, therefore, a self-centered a-hole. 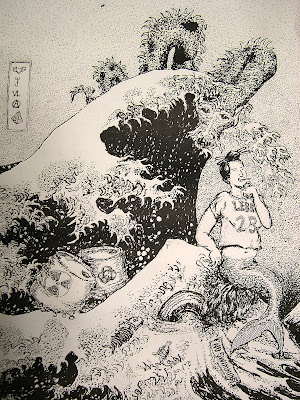 MISS HOKUSAI, from animator Keiichi Hara, is actually a neatly rendered Japanese feature cartoon (derived from a manga, or comic book) that sort-of examines Hokusai via his daughter Oi. Who herself was an artist. And, if the movie/manga is anything to go by, also a rather prickly, closed-in personality.

Oi narrates, from the closing years of the Tokugawa Shogunate that were Hokusai’s era. She and her famous father – a gruff mentor, not cruel but not particularly interested in much outside of his artwork – live a slovenly, semi-nomadic life apart from the rest of the family in Edo (Tokyo), simply moving from one studio-residence to another whenever the messes pile up too much.

Oi’s personality (underscored by an electric guitar soundtrack) is virtually that of a surly rock-and-roll chick. She briefly has a platonic crush on a handsome young artist in her father’s circle, but shuns him ever after when she sees the guy escorting another maiden.

Oi is a serviceable artist herself, but is told her figures lack the life that her father puts into his depictions – especially in the erotica (not shown) that Hokusai does for paid clients. Accordingly, Oi pragmatically seeks to become a better artist via losing her virginity to a sort of bisexual boy-geisha (I know such things exist in Japan, just don’t ask me what they’re called; I forget. Maybe because I was just reminded that there was a famous Japanese porno-gore film called ENTRAILS OF A VIRGIN and that has washed all else out of my head).

The plot, as you might have gathered, is episodic indeed. And, as is the case with much Japanese animation, a lot of it has paranormal overtones. Nothing too extreme, but the taciturn Hokusai is called up to fix things when a painting of the torments of hell is literally haunting its owner. He also fast-talks his way into spending the night under the roof of one of Oi’s own clients, an elegant courtesan, and thus gets to witness a bizarre out-of-body phenomenon.

Finally and most poignantly, we see Hokusai’s rejection of Oi’s younger sister – who was born blind and sickly – and a slightly supernatural tinge to this daughter’s sad tale.

I cannot tell how much of the story is verifiable biography and how much is invented; in fact, the real life Oi was completely overshadowed by her famous father. Thus, fertile ground for what-ifs and inventive tale spinning.

For a movie with such a cipher as its lead, not a terribly strong storyline, and really not much of an ending at all, MISS HOKUSAI still goes by without a dull moment. Its little epiphanies about art and life and the gods are pleasantly thought out, and the feature evokes a Japan just before Western contact with nostalgia and perhaps a bit of pride. And it looks great as well.


I’d like to say Hokusai himself would have been proud. Then again, who knows what he might have said? Artists are sort of a-holes. (3 1/4 out of 4 stars)
Posted by Charles Cassady Jr. at 10:49 PM