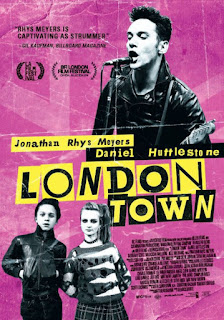 Just what we need. Another movie in which a young man comes of age against the backdrop of a vibrant musical and cultural movement. In this case, the young man is fifteen year old Shay Baker (Daniel Huttlestone), the working class son of a piano seller (Dougray Scott). Mom is out of the picture, having traipsed off to lead a bohemian lifestyle in London leaving Shay and his little sister behind. As for the musical and cultural movement the characters inhabit, it's the punk scene of late eighties England

Shay desperately wants to see his absent mother, and gets excited when she invites him to come visit. Dad isn't having it, but he does give Shay a little extra spending money when he sends him to pick up some piano parts in London. On the train ride there, he has a "meet cute" with punk rock girl Vivian (Nell Williams).


Vivian introduces Shay to the burgeoning UK punk scene, in particular The Clash, and of course it's a life changing experience that has the young man dyeing his hair and talking sass to dad overnight. But Shay can't stay surly too long, as dad gets injured and it's up to Shay to help ends meet until his dad recovers.

So he takes over dad's other job, being a cab driver. And of course he picks up Clash vocalist/guitarist Joe Strummer (Jonathan Rhys-Meyers) who gives young Shay the benefit of his advice. Yawn.

Ultimately LONDON TOWN is an utterly pedestrian if professional looking affair with none of the energy or urgency of the milieu in which it is set. Generic in both characters and script, anyone who has seen more than a handful of movies will find it a tedious bore unless they are specifically looking for something completely safe and familiar. 2 out of 4 stars.
Posted by Bob Ignizio at 12:00 AM