Ixcanul (October 13th and 16th at the Cleveland Cinematheque) 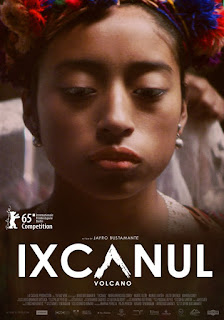 Maria (María Mercedes Coroy) has been promised to Ignacio (Justo Lorenzo), a supervisor on the coffee farm where she and her parents (María Telón and Manuel Antún) live and work. However, Maria is more attracted to her co-worker Pepe (Marvin Coroy). She's also attracted, perhaps moreso, to Pepe's stories of America. Pepe plans to go there, and Maria wants to come along. To this end, Maria has sex with Pepe in hopes that it will convince him to take her when he leaves.

Proving that men are very often irresponsible where sex is concerned regardless of what country they live in, Pepe refrains from any efforts at birth control. When Maria brings it up, he simply replies with the old chestnut about how nothing can happen the first time. A few months later, it becomes obvious that this holds no more true in Guatemala than anywhere else.

The ramifications of Maria's pregnancy are considerable. She and her parents could lose their jobs and their home. Nonetheless, the family forges on, relying on superstition and folk beliefs to see them through. This doesn't work out so well. However, when circumstances force Maria and her family to interact with the modern world, they don't fare much better.

IXCANUL is a finely crafted tragedy that pulls on the heartstrings without descending into melodrama. Writer/director Jayro Bustamante takes a very straightforward, almost minimalist approach. He relies mostly on carefully composed shots in which the camera doesn't move at all, focusing on the subdued and naturalistic performances of his cast. Also, there is no musical score to manipulate audience emotions; Bustamente rightly trusts the drama and emotion of his story to come through on their own. The film's themes and messaging are never heavy handed, but a compelling argument for education as a force of empowerment still comes through. 4 out of 4 stars.