Creepy (opens in Akron October 28th at the Nightlight Cinema)


[CREEPY opens in Akron on Friday October 28th exclusively at The Nightlight Cinema.] 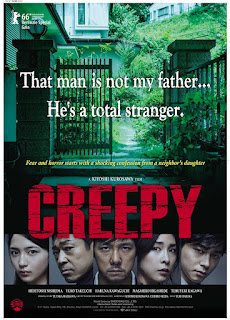 There are times when a gifted filmmaker can take subpar material and elevate to a higher plane. But there are also times when the combination of skilled director and mediocre screenplay just becomes infuriating as we are forced to see talent wasted . Sadly, the latter of these two scenarios is the case with Kyoshi Kurosawa's CREEPY.

The plot is very much by-the-numbers Hollywood thriller tripe. Police detective Koichi Takakura (Hidetoshi Nishijima) retires from the force after things go very wrong with a serial killer he has captured utilizing his skills as one of Japan's only experts in criminal psychology. A year later, Takakura has found a new calling as a professor, but he still has the old itch to investigate crimes.

Takakura's wife Yasuko (Yuko Takeuchi) is also a bit on the nosy side, particularly with regard to the couple's new neighbors. She's especially curious about Mr. Nishino (Teruyuki Kagawa), who she describes as a creep. And yet she still keeps on trying to connect with the guy, bringing him leftover stew and teaching his daughter how to cook.

Maybe Takakura would be paying more attention to the strange goings-on at home if he hadn't gotten sucked in to an unsolved mystery involving the disappearance of three people who left behind their daughter Saki (Haruna Kawaguchi), whose memories of what happened are hazy at best.

There's never any real mystery to who did what, so all we're left with is tepid suspense and preposterous plotting. I'm all for suspending disbelief when it comes to horror films and thrillers, but everything about CREEPY is so utterly ridiculous and implausible that it's just not possible to do so in this case.

And yet, as mentioned at the start of this review, Kurosawa is a fine director, and he stages the action so well that you almost want to go with it. Solid work by the cast, too. Good enough that it just kind of makes you angry that the efforts weren't spent on something better. 2 out of 4 stars.
Posted by Bob Ignizio at 12:08 AM