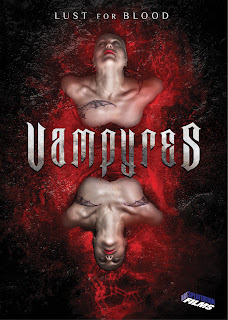 To be fair to VAMPYRES, I was willing to lower the bar considerably.

It is, after all, a remake of a soapy exploitation hit from the 70s, where the big "hook" was that the vampire girls were, gasp, bisexual! I had no loyalty to the original, which I had not yet seen, but even with my greatly lowered expectations, I still thought this movie failed on nearly all counts.

It's way less sexy and more tedious than I'm even describing here. You know when actors have really incompatible kissing styles but have to do an open-mouth kiss that usually ends with long strings of saliva or cringe-inducing slurpy noises or one actor basically slobbering all over the other actor's chin? Yeah, well, this is an exponential version of that --and exponentially grosser. The deeply misguided director (Victor Matellano) apparently thought this was hot enough to dedicate large chunks of the film to it. I suppose there's an adolescent or fetishistic audience for this somewhere.

Anywho, the story also includes an unrelated trio of friends who happen to be camping nearby that very house. Irrelevant backstories and dopey flirting take place through stilted, terribly-delivered dialogue in a whole spectrum of European accents. Eventually, the campers get involved with the bisexual blood lickers and more people get licked and killed. Then there's some dumb crap tacked onto the end about one of the characters perhaps being dead the whole time.

Really, it all comes off as cheap, amateurish nonsense.

The film's only mild redemption is that a handful of shots are somewhat complex and inventive, but the director's choices are strange. Sometimes, he opts for a complicated, elegant jib or drone shot, but the effect doesn't really seem to match the context of the scene. Then, there are other times when he falls back on horrible medium shots where everybody just stands in a line and delivers dialogue.

And how about that dialogue? Eeesh.

But I remind myself, shoddy production elements are frequently found in exploitation horror, and I could forgive those shortcomings as long as there is still some grindhouse charm.

Well, there's no great gore, no impressive practical effects, and no action. The nudity and sex never feel dangerous, dirty, or even interesting. Having now seen the original, I can also say that any of the gothic, Hammer-esque mood and atmosphere of the original has been neutered in this awkward and tonedeaf update.