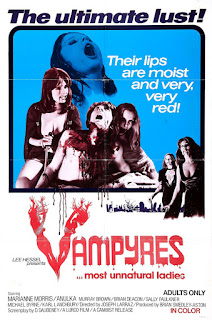 There is a reason VAMPYRES is still remembered (and even dreadfully remade) this many years after the Hammer era flooded cinemas with countless similar gothic horrors. For being essentially an exploitation picture, this cult hit is atmospheric, sexy, and rather well made.

After two beautiful women are seemingly killed while making love inside a shadowy mansion, they begin appearing on the side of a road in the English countryside. The mysterious women ask motorists for a ride back to that decaying mansion, where the drivers are enticed inside and eventually used as food. Meanwhile, a young couple has made the mistake of setting up their RV right next to the doomed property.

As the vampire lovers, Marianna Morris and Anulka turn in otherworldy performances that are both seductive and dangerous. In long cloaks and slinky gowns, their allure and charm explains why so many people could be convinced to follow these two ghouls into an abandoned house.

As with many British horror films of the time, the production design is rich and elegant, with that hint of 1970s oversaturation. The vampires reside among looming towers, howling cellars, and creaking doors, while the very modern couple travels in their contemporary RV through the cloudy English weather. It’s a winning mix of old-world elegance and post-mod Britain that creates a creepy, comforting world that the audience wants to inhabit. A lush orchestral soundtrack adds to that mood.

The shooting style is also above and beyond for most movies of this ilk. There are some very nice camera movements and framing here, including plenty of delightfully nostalgic quick zooms. Lighting is soft and warm, handsomely capturing the fleshiness of the frequently nude cast.

There are hints that perhaps the story was trying to imply that this was somehow happening on a loop or in a vortex, but that concept never really pans out.

It’s by no means a great film, and VAMPYRES is very much "of its time." The dialogue can be silly and the gory sex scenes are absolutely gratuitous. At no point does one forget that it is an exploitation piece about bisexual murderesses getting people naked and hacking at them with a knife.

That said, there is enough dark beauty, 1970s flair, and classic horror charm to make this low-end Dracula offspring rise above the blood and boobs. 2 ½ out of four stars
Posted by Unknown at 7:56 PM