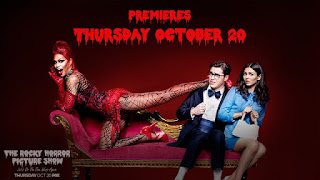 You want me to do the "Time Warp" again? Sure, I'm game. THE ROCKY HORROR PICTURE SHOW was an important part of my high school years in the eighties, but I'm not averse to seeing an update. Given its origins as a stage musical that has seen numerous revivals since its debut in 1973, new takes on ROCKY aren't exactly "new", anyway.

This new filmed incarnation, broadcast on Fox TV, has been titled THE ROCKY HORROR PICTURE SHOW: LET'S DO THE TIME WARP AGAIN. It is described as a "tribute" to the original film, and on some level I suppose that's accurate. But it's also accurate to describe it as a remake. A remake that seems both beholden to the original 1975 midnight movie classic, and at the same time strangely distant.

Certain sets and shots seem almost painstakingly recreated. Others are drastically different. The same goes for the performances. Ostensible hero and heroine Brad Majors (Ryan McCartan) and Janet Weiss (Victoria Justice) come across very much like the versions of the characters played by Barry Bostwick and Susan Sarandon, respectively. Transylvanian servants Riff Raff (Reeve Carney) and Magenta (Christina Millian) are decidedly different. Millian's Magenta doesn't even allow the banister to get lucky.

Perhaps the best casting in this version is that of transgender actor Lavern Cox in the role of Dr. Frank N. Furter, played by Tim Curry in the original. Lavern is probably best known for her portrayal of Sophia Bursett on 'Orange is the New Black', and having a "Sweet Transsexual" who really is one makes for a decidedly different dynamic. Cox is also black, another inescapable surface difference between her and Curry.

That makes it all the more frustrating that Cox then goes out of her way to mimic Curry's accent and, at times, physical performance. That's fine, if uninteresting, for the most part, But there are times the accent doesn't quite work, as when she refers to the story's ostensible hero Brad Majors (Ryan McCartan) as "Bread". Cox comes across as much more herself when she's singing, and one wishes that would have carried over into the spoken lines as well.

Other cast members fare considerably poorer in the singing department. Victoria Justice does well, at times sounding almost exactly like Sarandon. But most of the cast sound like they're trying to impress Simon on 'American Idol'. Lots of unnecessary flourishes (especially in Ivy Levan's take on "Science Fiction Double Feature") and general blandness (Staz Nair as Rocky being the worst offender). And poor Ben Vereen. This is a man who most certainly can sing, but he's given the worst possible role in that respect, that of the wheelchair bound scientist Dr. Everett Scott.

Other off-putting aspects of this production are the occasional cutaways to a theater audience watching the movie and delivering some of the lines actual midnight screening fans would shout at the screen. Never any of the really funny or offensive ones, though. It doesn't work on any level, and just comes across as an annoying gimmick that pulls viewers out of the film.

But the biggest problem with this version of ROCKY is how safe and sterile it all feels. I know that times have changed a great deal since the original was released, and even since I would sneak out to catch midnight showings in the mid to late eighties. Even so, this material has enough of the transgressive in it that it ought to feel edgier than it does. But this is a version of ROCKY that not only refuses to make the cannibalism scene explicit, it won't even let Frank grease his creation up with Vaseline.

I imagine those who have never seen THE ROCKY HORROR PICTURE SHOW might at least find this a reasonably enjoyable introduction, but it certainly offers no improvements. It feels like everyone's hearts were in the right place, but at the end of the day this falls into the category of pointless remakes. 2 out of 4 stars.
Posted by Bob Ignizio at 12:00 AM