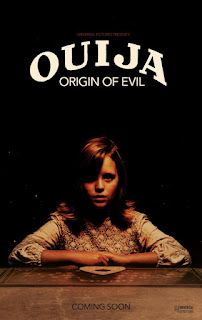 You have to admit, Blumhouse Productions has found a winning formula for modern mainstream horror. Their films are all slick, professional affairs geared towards a mainstream audience looking for horror films that take themselves seriously, but don't wallow in the gory, sadistic extremes of a Rob Zombie or the SAW series. And the films are all made for around 10 million or so, chump change by Hollywood standards, virtually guaranteeing a profit on the first week of release. Other studios could learn a thing or two, regardless of what kind of movies they're making.

The latest from the company is OUIJA: ORIGIN OF EVIL, a prequel to 2014's OUIJA that no one, as far as I know, asked for. And yet, here it is, and it's actually pretty good.

Set in the late sixties, the plot primarily concerns widow Alice Zander (Elizabeth Reaser) and her two daughters: teenage Paulina (Annalise Basso) and eight year old Doris (Lulu Wilson). To make ends meet, the family works together in the psychic racket. Mom does readings for grieving clients hoping to contact lost loved ones, and her daughters provide simple special effects. They justify this bit of fraud as a way to help people achieve closure. It also helps the pay the bills, though not nearly as well as they might like.

Paulina sneaks out to hang with friends and do a little underage drinking one night. One of her friends has a Ouija board, which the group plays with. Paulina immediately grasps what's going on (the ideomotor effect – look it up), and convinces her mom to add a board to their act.

As it turns out, the Zander house has genuine supernatural beings inhabiting it. The entities use youngest daughter Doris as their conduit, and Alice is convinced it's her late husband coming through to offer comfort and financial assistance.

It's not. But then, this being a horror movie, you kind of knew that, right?

Director Mike Flanagan, who co-wrote the screenplay with Jeff Howard, takes a subtle, slow burn approach to horror that harkens back to the films of Val Lewton and ghost stories like THE HAUNTIN and THE UNINVITED. It's not nearly that good, mind you, but it at least tries. And there are some concessions to modern tastes, notably as with all supernatural Blumhouse films, it's never enough for the malevolent supernatural entities to be mere ghosts.

Nonetheless, this is a solidly entertaining spook show that, while not ignoring that all important youth demographic, doesn't bend over backwards to appeal to them. Middle aged mom gets at least as much time as her daughters, and even has an almost romantic subplot with a middle aged Priest (Henry Thomas – yes, Elliot from E.T. is now middle aged) whose wife died before he became a man of the cloth.

But of course the real attraction here are the scares, and on that front the film most definitely delivers. And despite the PG-13 rating, some of what's shown gets fairly intense, if not gory. I'm pretty lax about taking my 5 year old to movies with this rating, and he even went with me to see THE SHALLOWS (and enjoyed it). I'm glad I didn't take him to see this one, as it probably would have scared the crap out of him. I'd hazard a guess a fair number of grown-ups will find the film scary, as well. 3 out of 4 stars.
Posted by Bob Ignizio at 12:00 AM