[31 Days of Halloween 2016: OBSERVANCE is now available on home video and VOD.] 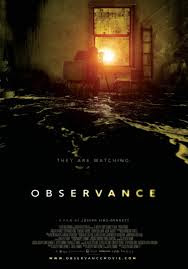 Australian filmmaker Joseph Sims-Dennett's shocker evidently made some waves on the festival circuit (or otherwise somehow finessed a lot of favorable quotes from a lot of critics and bloggers you’ve never heard of).

I guess it’s a could-have-been-worse experience; a hallucinatory suspense drama with superficial resemblance to Francis Ford Coppola's THE CONVERSATION and some of Roman Polanaski’s early work on insanity and obsession, and maybe a scintilla of REAR WINDOW.

It’s got not so much a storyline as a situation: In an unspecified city (which struck me as Aussie locations dressed up to seem as American as possible) a young private investigator (Lindsay Farris) is deep in debt and grief from the loss of his young son. Stepping away from an imploding marriage (offscreen) he has taken a big-money assignment secretly monitoring an attractive young woman on extended leave from a biotech firm.

The unstable protag occupies a deserted apartment building across from her window and is distressed and powerless to see her seemingly at the mercy of an obsessed, possibly violent suitor. But repeatedly, the (unseen) client tells him over the phone to just remain and watch and not intervene. Or else.


There are clues and red herrings of powerful family conspiracies and past murder, as the antihero's own obsessions start overwhelming him with visions of death, mutilation, disease and contamination – possibly by genetically modified organisms deliberately introduced into his environment. Or not.

Many grotesque visuals are achieved with gruesome effectiveness by the filmmakers obviously working on a small budget, but in the end it all adds up to bafflement rather than a coherent narrative. Oh, but some righteous gore, for those of you into that sort of thing.

Call me crazy (and in a depopulated effort like this, most everybody could be), but there is much to be said for plots and character development that look like something was actually thought out, not just turned into a morbid video-art installation. I do not doubt we will hear from Joseph Sims-Dennett again, perhaps ultimately doing FAST-FURIOUS 14 or somesuch that will put his quick sucker-punch non-linear editing skills to their normal use, and I don’t doubt OBSERVANCE will impress the more easily impressed as offbeat and provocative. But I personally found its tricks, for the most part, obvious and mildly frustrating. For real horror, check out the upcoming presidential election choices. (2 ½ out of 4 stars)