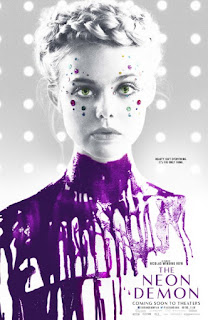 Is THE NEON DEMON a horror movie? It's certainly horrific in the way it depicts how the fashion industry chews up and spits out the young women directly involved in it, reaching out to taint those who merely consume it, as well. And there's no doubt that writer/director Nicolas Winding Refn is drawing heavily on the visual style of seventies and eighties "giallo" films. The very first scene in the movie is a fashion shoot in which ingénue Jesse (Elle Fanning) is depicted as the victim of a bloody knife murder right out of a Dario Argento film. Other, far more real horrors lie in wait for Jesse later.

So yes, I'm going to call it a horror film. A very beautifully shot, lit, costumed, and set designed horror film that is light on plot and character, but heavy on theme and style.


One could easily say that the theme of THE NEON DEMON is so straight forward – almost self-evident, really – that there's no point in bothering to make a film about it. And yet, however much that may be the case, our culture continues to persist in giving women the message that their only worth is their appearance. Not just in the fashion industry, but in pop music, the movies, and very clearly this year in politics, where one (male) candidate for United States President has criticized his (female) opponent for not having a "Presidential look".

Besides, it's not just what a film is about, as Roger Ebert often said. It's how it's about it. And anyone familiar with Refn's past work (DRIVE, VALHALLA RISING, ONLY GOD FORGIVES, BRONSON, the PUSHER trilogy) knows that describes Refn's films to a "T". His style is his substance, and if one accepts that movies are primarily meant to be a visual medium, there are few directors working today that are a better example of that notion. Refn doesn't need traditional character development or plot; his visuals say all that needs to be said.

Of course the man also knows how to make the right choices when it comes to music to accompany those visuals. As with DRIVE, Refn opts to give THE NEON DEMON a slick, languid soundtrack (composed and performed by Cliff Martinez) powered by electronic beats and throbbing synthesizers. But make no mistake, this is no candy colored disco party. Blood flows, corpses are violated, and you definitely don't want to eat the hors d'oeuvres.

I think NEON DEMON is something of a masterpiece. It's certainly one of the most audacious, perfectly realized films of the year, achieving exactly what Refn set out to do both on screen and in terms of eliciting a reaction from audiences. It's definitely not the kind of movie you're likely to hear anyone say, "eh, it was okay," about, and I'd wager at least half the people who decide to give the film a look will not just dislike it, but flat-out hate it. Given what a bland, safe, unoriginal year(s) it's been at the movies, I'd say we could use a few more movies willing to run that kind of risk. 4 out of 4 stars.
Posted by Bob Ignizio at 12:00 AM