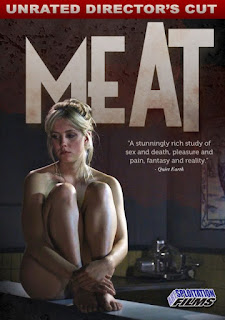 For those who prefer cerebral arthouse horror, MEAT is a pallid-colored puzzle box that deserves a decent after-movie discussion and possibly even a repeat viewing. Decidedly European in its approach, it is a twisty, sexually-charged character piece, abandoning the typical jump scares and pulse-pounding suspense that are the obvious trademarks of American horror.

The film initially follows two seemingly disconnected stories. In the first, a haggard investigator tries to solve a murder while dealing with the toxic relationships he has with numerous women. A more stylized story is interwoven, following the constantly carnal lives of a butcher shop crew, exploring both their sexual dalliances and gory work duties. Eventually, the two storylines come together, and the plot unfolds into a crazy headtrip that isn't easy to decipher.


The shift in visual styles between these two narratives is almost imperceptible at first, until surrealism begins to take over in one story and bleak realism remains steadfast in the other. The motives behind this increasingly divergent aesthetic become more apparent and impressive as the film reveals itself.

Certainly, some viewers will be impatient with the pacing, the plot, and the generally cryptic nature. The film takes its time, doesn't overexplain, and revels in silent moments.

Directors Victor Nieuwenhuijs and Maartje Seyferth allow their actors to inhabit long takes, developing complex characters through subtle, exacting performances. The scenes play out with a quiet authenticity, unencumbered by edits. The result is phenomenal, naturalistic work from the entire cast, but particularly haunting performances by Titus Muizelaar and Nellie Benner as the leads.

In truth, the movie is more of a thriller than a horror, especially by American viewing standards. What makes the film frightening and resonant is the sense of unease and mystery surrounding these characters, all of whom seem callous and creepy, if not outright sinister.

Co-director Nieuwenhujis also served as cinematographer, and his visuals are stunning and grotesque -- full of carcasses, human flesh, and ashen, deathly tones. In particular, his use of overhead shots creates some of the most arresting images in the film, simultaneously feeling omniscient and claustrophobic.

The film, written by Seyferth, sits in the muck and meditates on the stickier aspects of sexuality and death, including cruelty, lust, perversion, rape, consent, suicide, and murder.

It can be a challenging watch, and plenty of it is open to interpretation without any obvious answers, which will surely be a turn off to many people.

Character-driven and often a bit confounding, MEAT is absolutely not for mass consumption, nor for those seeking typical slasher or paranormal fare. But for patient cinephiles who enjoy a good post-viewing debate, there is plenty of juicy ammo here to argue about the film's disorienting narrative, and what it says about us -- as sexual beings, as carnivores, and sometimes, as prey.
3 out of 4 stars