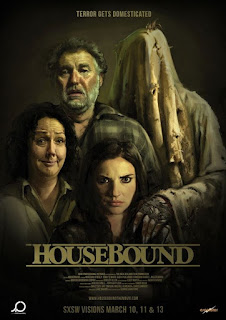 Once in a while you end up picking a movie on Netflix to watch with zero expectations, and end up having a blast. HOUSEBOUND, the 2014 New Zealand film written and directed by Gary Johnstone is one such film.

HOUSEBOUND is a hybrid of horror and comedy, heavy on the comedy, even if the movie begins like a heist film. At the start Kylie Bucknell (Morgana O’Reilly) unsuccessfully attempts to rob an ATM. She has had her fair share of trouble throughout her life, but this time she is placed under house arrest. This means living with her happy-go lucky mother Miriam, hilariously played by Rima Te Wiata, and her stepfather. Eight months of house arrest wouldn’t be so bad, but getting stuck with her mom and stepfather seems like pure hell for her. It’s clear there is a strain on the relationship between mother and daughter. Kylie seems particularly annoyed with her mom’s insistence that their home is haunted. Miriam even calls local radio stations to talk about it.

Soon enough, Kylie begins hearing noises in the house and having strange sensations that her family isn’t alone in their home. One night while in the basement, Kylie feels a hand grab her. She’s convinced that someone is in the house. As her fears escalate, the town police officer, Amos, starts to check in on the house, not sure whether this is part of Kylie’s plan to simply get out of her house or if she is telling the truth.

In the process of her house arrest and strange happenings, Kylie has to see a psychologist, Dennis, only furthering the idea that Kylie is a liar when she tries to convince Dennis that someone is in her their house.

Kylie’s fear is real and she starts to suspect everyone of sneaking around her parent’s home, including one particularly creepy neighbor. The result of her hunt for the intruder spirals in comedic and deeply disturbing directions that you couldn’t initially imagine.

It would be easy to compare HOUSEBOUND to SHAUN OF THE DEAD or THE CABIN IN THE WOODS, based purely on the fact that it’s a fun, but creepy film. However, neither really give you a good idea of what HOUSEBOUND is all about. It may share a genre with those films, but HOUSEBOUND is its own amusing ride.

The creepy moments are creepy enough, and there are some genuinely funny moments along the way too. If you’re looking for something that won’t scare your socks off, but still give you a thrill, HOUSEBOUND might be worth a trip (from your couch) to Netflix, where it is currently streaming. 3 out of 4 stars
Posted by Joseph Anthony at 12:02 AM