31 Days of Halloween 2016: Holidays (now on video and streaming on Netflix)


[31 Days of Halloween 2016: HOLIDAYS is now available on home video, VOD, and streaming on Netflix.] 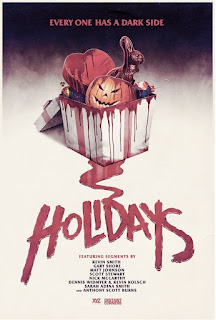 Horror has never been content to constrain itself merely to Halloween. We've had numerous Christmas horror films (including the infamous SILENT NIGHT, DEADLY NIGHT), FRIDAY THE 13TH, APRIL FOOL'S DAY, MOTHER'S DAY, and the whole LEPRECHAUN series for St. Patrick's Day. And as a reader of Mad Magazine back in the eighties, I still remember their slasher film parody "Arbor Day". That's by no means all, but you get the idea. So it seems only fitting that the current boom in horror anthology films started by the cult success of V/H/S and THE ABC'S OF DEATH would eventually produce a holiday themed film, the aptly named HOLIDAYS.

As per usual with these affairs, it's a mixed bag in terms of quality. That said, on the whole most of the segments are well made and fun, flavored with a macabre streak of humor. Kevin Smith reinforces my dislike for him as a filmmaker with his Halloween themed segment, and a few others fall flat, but overall I was entertained more than not.

Easily the most original and twisted installment is the one for Easter. Like the late comedian Bill Hicks, it points out the oddity of mixing religious beliefs about the death and resurrection of Jesus with a giant bunny rabbit leaving baskets full of eggs and chocolate. Only this being horror, the segment takes it further to present a truly disturbing and blasphemous "Bunny". I wouldn't say it's particularly scary, but it will definitely stick with me.

Like most of the modern wave of horror anthologies, this one leans a bit too heavily on cheap jokes and excessive gore for my tastes. I'm more a fan of the old seventies Amicus films like THE HOUSE THAT DRIPPED BLOOD and ASYLUM. Still, HOLIDAYS is a suitable bit of cheese to watch with a group of friends for a few groans and chuckles. 2 ½ out of 4 stars.