31 Days of Halloween 2016: The Greasy Strangler (October 7th and 8th at the Capitol Theatre)


[THE GREASY STRANGLER screens Friday October 7th and Saturday October 8th at midnight at the Capitol Theatre, and on VOD starting October 7th.] 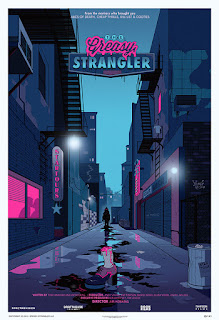 I've seen a lot of movies in my forty-some years on this planet, a great many of them weird by the average filmgoer's standards. While by no means have I seen every cinematic oddity made, I've seen more than my share. And I can safely say, I have never seen a movie quite like Jim Hosking's new horror-comedy THE GREASY STRANGLER.

Oh sure, there are some obvious touchstones. Troma films. The early works of John Waters. And perhaps the closest cousin to this might be Adam Rifkin's THE DARK BACKWARDS. If these names I'm dropping mean nothing to you, all I can say is that we're entering some seriously weird and disturbing territory here.


I'll give a plot synopsis, but understand that it can't begin to capture how weird this film is.

Big Ronnie (Michael St. Michaels) and his son Big Brayden (Sky Elobar) give factually dubious "disco tours" to small groups of clueless patrons. At home, Big Ronnie berates his son for numerous shortcomings, but especially for not making his meals greasy enough. Occasionally Ronnie goes out at night covered in grease and kills people, then walks through a car wash owned by his blind friend to wash the gunk off.

Meanwhile, Brayden falls for Janet (Elizabeth De Razzo), a woman from one of the tour groups. The relationship actually seems to be going well, which pisses off Ronnie to no end. Not only does this seem to escalate his homicidal tendencies, it also leads Ronnie to try and steal his son's girl. Eventually it all comes to a head.

You may well be thinking that doesn't sound too out there. Trust me, it is. To catalog this film's list of perversions, aberations, and offenses to good taste would only spoil the fun, though. Just be warned that there's a whole lot of gore, unerotic nudity, and positively twisted ideas and dialogue. More than enough to keep you staring in disbelief, gasping in horror, and laughing despite yourself.

Major kudos to the cast, who manage to make these bizarre characters almost believable. Especially Michael St. Michaels, a guy who has only 9 acting credits on IMDB in a career that goes back to 1974 (and includes the VHS era cult favorite THE VIDEO DEAD). The man deserves an Oscar nomination for his work here. Or at least a Drive-in academy award, if Joe Bob Briggs is still handing them out.

I had a lot of fun with this film pretty much until the last 10 minutes or so. At that point, it feels kind of like director Jim Hosking (who co-wrote the script with Toby Harvard) doesn't know how to wrap it up, so he just goes completely off the rails. Not only does it upset the delicate balance between complete absurdity and some sort of possible reality that the film has maintained until then, moving from something still recognizable and relatable into 'Tim and Eric' "weird for weird's sake" territory. It also tips over into a kind of mean spirited misogyny that feels untrue for one of the characters and, for me, at least, struck a discordant note. I think the movie is trying to make some kind of commentary on family, and how even when we try not mirror the worst aspects of our parents, we often wind up doing just that, but it doesn't work for me.

Still, this is one of the most original and, if your sensibilities are twisted enough, entertaining films to come along in years. I can't really decide if I should give it 2 ½ or 3 stars out of 4. So let's say 2 ¾ out of 4 stars, and just go see it if you like weird, twisted horror-comedies.