31 Days of Halloween 2016: Freaks of Nature (now available on home video and VOD) 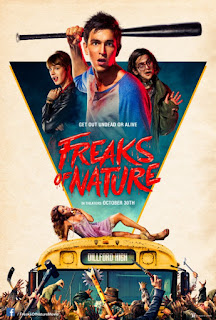 Full of teen angst, off-beat humor, and human-devouring creatures, FREAKS OF NATURE is like a John Hughes movie set during a gory, goofy apocalypse.

Mixing horror and comedy, the story opens in Dillford, OH, the home of the Riblet sandwich. It is also home to humans, vampires, and zombies, who all have to co-exist in the suburbs. No matter what species, the teens all have to go through the hell of being in high school together. This adds a whole other level to finding the right clique.

Then aliens show up, and the delicate balance between all of these groups is completely upended. The town descends into all-out chaos, and it’s up to our three teen heroes – a human, a vampire, and a zombie – to figure out how to defeat the aliens and restore peace to their little hamlet, all while dealing with the usual high school bullshit.


While it may sound like there might be too much going on here, it’s a blast to see these different creatures in the same feature, and it's the film's biggest asset. In fact, they could have gone even further and done more with this plethora of beasts. It would have been fun if the film had explored the unique problems that such co-existence might have created, especially for comedic effect.

Ultimately though, the alien invasion and all of these horror elements are really just the backdrop for a millenial version of a (slightly) raunchy teen comedy, complete with many of those old clichés: the crush on the neighbor girl; the dorky sidekick; mean or ineffective adults; the quest to get laid.

The pace sags when the movie relies too heavily on these coming-of-age comedy aspects, particularly in the second act, when the trio takes refuge in the empty high school. There’s too much sitting around and discussing pathos and parents and virginity and reputation and popularity and blah blah blah.

By the third act though, the story kicks back into horror gear, and a few more amusing surprises are revealed.

Ultimately, the movie, even with all its gore and R-rated humor, feels like a fun, maybe even cute story about the importance of people working together and supporting each other. (Though it does dilute its message a bit with the treatment of the aliens.)

The jokes don’t always land expertly and it isn't exactly scary, but as far as horror comedies, FREAKS OF NATURE is a frothy, blood-splattered party worth attending, even just for a few laughs and to see all these different movie monsters all hanging out in the Midwest 'burbs. 2 ½ out of 4 stars
Posted by Unknown at 12:00 AM