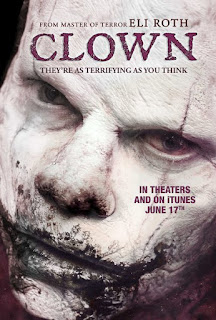 A demonic clown suit turns a loving father into a homicidal lunatic. Sounds like it should be fun, right?
The elevator pitch on this one seems like a premise ripe for colorful deaths and dark humor. However director Jon Watts, who also co-wrote with Christopher D. Ford, takes a grimy, middle-of-the-road approach that pretty much sucks the air out of the concept, leaving a limp half-inflated balloon animal of a movie.
After a rent-a-clown cancels his appearance at his son’s birthday party last minute, real estate agent Kent McCoy begins to search the basement of a house he’s trying to sell. Inside a chained-up chest, he finds a gross antique clown suit, complete with a red nose and a ratty rainbow wig. What kid wouldn’t love that?


After he falls asleep in the costume, it begins to take over his mind and body and soul and yadda yadda…

Even for coulrophobes, there is nothing particularly unique, frightening or compelling here. The sole memorable moment is a kill scene at an indoor playground, capitalizing off of the claustrophobic, isolating nature of those big, enclosed plastic tube mazes.

The entire film is based on a fake trailer that Watts and Ford released onto Youtube, which declared the evil clown film was “From the Master of Horror Eli Roth,” long before Roth even knew about the project. Impressed by their chutzpah, Roth signed on to produce and star in the feature.

Though Roth has never been the “master” he claims to be, it all sounds like it could have been a fun, gory, grindhouse throwback.

Ultimately it feels like a lot of missed opportunities.

The flat, drab production design and cinematography neither captures the candy-coated creepiness of clowns nor the gritty, dated kitsch of grindhouse.

Most shots are just lazy, eye-level medium shots, missing any of the wacky, lurking visual flair that one might expect from a scary clown movie or even just a horror movie in general. Perhaps its largest problem: none of the humor, campiness, or over-the-top nature of the basic premise are played up in the film, not even in a tongue-in-cheek manner. They just tried to make a straightforward killer clown film, and they made a pretty lousy one, at that.

As a result, it’s just a middling B-movie, way less entertaining than, for instance, JACK FROST, a terrible film that understood and embraced its own inherent absurdity. Here, it’s all played very straight.

CLOWN feels like it isn’t in on the joke it's trying to make, so we can't laugh with it. Sadly, it's not even amusing enough for us to laugh at it.