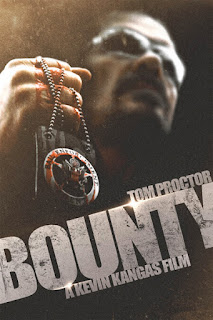 Sometimes, no matter how hard one tries, it's impossible to avoid reading another critic's comments on a film. Right there in the first line of the description for the 2011 release BOUNTY when I pulled the film up on Amazon Prime is a blurb from website Terrorhook: "Dog the Bounty Hunter meets INVASION OF THE BODY SNATCHERS." That's a pretty good summation of the film, so a tip of the hat to Rick L. Blalock, writer of the review.

Of course, that says nothing about whether BOUNTY pulls that premise off well or not. Things could easily get cheesy, or fall into the annoying shaky cam and shitty editing trap of so many "found footage" horror films. Thankfully, writer/director Kevin Kangas does a good job at keeping things polished enough to be watchable (this is, after all, supposedly being shot by a pro crew for TV broadcast), but gritty enough to be believable.

The set up is that the camera crew is following bounty hunter Carl "Grunt" Henderson (Tom Proctor) as he chases down the usual assortment of bail jumpers with the help of his crew, which includes Carl's recovering drug addict son Kelley (Chris O'Brock). There are a few jumpers Carl is especially keen on capturing, chief among them "The Mad Scientist" Ernie Litwak (Neil Conway). Eventually Carl gets a line on the guy, but instead of finding his quarry, he discovers a young woman tied up in a hotel room.

Carl and his crew let the woman go, and by way of saying thanks she bites Kelley, claiming she felt threatened and didn't know what she was doing. When the crew finally catch up with Litwak, he explains that the woman was an experimental test subject infected with a disease that turns her into a cold, emotionless cannibal who can still pass, more or less, for a normal person. The infection, it turns out, is contagious. Carl doesn't believe any of this nonsense at first, but before long it's obvious that something strange is afoot, and Kelley's possible relapse into drug use is the least of his problems.

There's nothing earth shattering about BOUNTY, but it is a smart, solidly entertaining little horror flick that uses the found footage approach well. If you're looking for some Halloween thrills and chills that are a little more fresh than the same old classics, yet still has a familiar old-school "B" horror feel, you can't do much better. 3 out of 4 stars.
Posted by Bob Ignizio at 12:00 AM