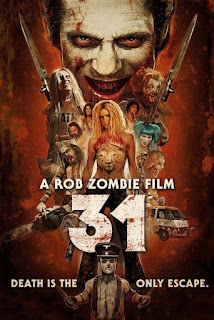 Just to get this out of the way, I am not one of those hand-wringing, horror-hating film critics who gets upset over cinematic violence, gore, and sadism. So while it probably bears mentioning for those more sensitive readers that Rob Zombie's 31 is indeed rife with blood and brutality, that's not why I think it's the worst movie of the year so far (in a year with several strong contenders for that title). No, it's because 31 is just straight up lousy filmmaking.

I suppose some sort of plot synopsis is warranted, so here goes. We start off with a black and white scene in which a homicidal clown named Doom-head (Richard Brake) gives a laughable monologue that tries way too hard to be edgy and disturbing before killing his helpless victim.

We then switch to color. It's a Halloween day in the mid seventies, and a group of skeezy looking carnies are on the road to their next gig. We spend maybe 10 minutes getting to know them before they get ambushed by what I assume are some of the Joker's henchmen doing a little moonlighting, based on their matching prison clown ensembles.

Most of the carnies are killed in the attack. The handful of survivors – Charly (Sherri Moon Zombie), Roscoe (Jeff Daniel Phillips), Panda (Lawrence Hilton-Jacobs), Venus Virgo (Meg Foster), and Levon (Kevin Jackson) – are forced to participate in a "most dangerous game" scenario involving psychotic circus clowns. If they can last 12 hours, they'll be set free.

We then witness ninety minutes of profanity laced tirades, cannibalism (in a scene that Zombie, doing a typically lazy homage, cops from THE ROCKY HORROR PICTURE SHOW), chainsaw fights, choppy editing, headache-inducing strobe lights, a little-person Hitler clown, and E.G. Daily (Dotty from PEE WEE'S BIG ADVENTURE) with black electrical tape on her nipples under a see through white t-shirt playing a character named Sex-head. If nothing else, you can't say that Zombie doesn't have a distinctive aesthetic. Unfortunately, unlike his better films (THE DEVIL'S REJECTS, LORDS OF SALEM), that's about all he has here.

There isn't a single actual character in 31. Just an interchangeable collection of stupid, unlikable bodies covered in dirt and fake blood. The dialogue sounds like it was written by a mentally challenged 16-year-old horror fan with a redneck fetish trying to rip off Tarantino and failing badly. And if you were to play a drinking game where you take a sip every time someone drops an f-bomb, you would wind up in the hospital by the 30-minute mark.

31 piles on so much ugliness and cruelty, presented with no contrast whatsoever, that rather than being terrifying or disturbing it simply becomes numbing and dull. It's a relentlessly stupid and unpleasant film that offers no payoff, either thematically or dramatically. And this is coming from a guy who actually liked Zombie's previous nihilistic howl, THE LORDS OF SALEM. If you still want to see this thing, you may want to hold out for the DVD release. Apparently Mr. Zombie plans to gift us with an even more gruesome unrated version. Plus the VOD rental price (at least when I checked it out) is 9.99. A bit steep for a rental even if you like the movie. 1 out of 4 stars.
Posted by Bob Ignizio at 12:00 AM