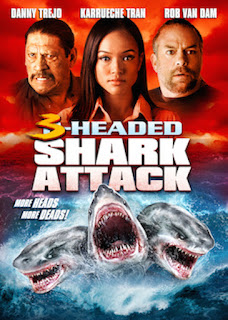 I'm not an idiot. I know what I'm getting myself into when I put on a movie called 3-HEADED SHARK ATTACK. It's not a question of whether or not it's going to be bad, but rather how bad will it be. And will it be bad in such a way that I'm entertained, or just depressed and demoralized?

The film starts out enjoyably enough with a group of attractive young people goofing around on the beach. Excuses are found to get some of the female cast members out of their swimsuits. Then the 3 headed shark comes on the scene and starts chowing down, turning the water red with CGI gore. It's all pretty ridiculous, but you can't say director Christopher Douglas-Olen Ray (son of schlock impresario Fred Olen Ray) doesn't deliver the goods.


Then we get on with the plot, such as it is. There's an underwater research station by the Great Pacific garbage patch which is like a moron buffet for our titular sea beast. It chomps its way through the facility, then follows the survivors as they try to escape onto a party boat. As they fight to stay alive, researcher Maggie (Karrueche Tran) and her activist ex-boyfriend Greg (Brad Mills) sort of half-ass rekindle their romance in a vain attempt by the movie to get us to care about someone in this piece of trash. Danny Trejo is also on hand as a bad-ass fisherman, and pro wrestler Rob Van Dam does his best in a supporting doomed hero role.

Apparently this is a sequel to 2-HEADED SHARK ATTACK. I somehow missed that cinematic masterpiece, but it doesn't seem to make much difference. The first film is never referenced, and there's nothing here that feels like an actual continuation of anything.

As for the quality of the film itself, the cast are passable and, other than the cheesball shark effects, the production values aren't too shabby for product from The Asylum, the same folks who brought you the SHARKNADO films and other such cynical and idiotic SyFy originals/straight to video crapfests. For whatever reason – maybe I had just the right amount of alcohol in my bloodstream, maybe I was in a good mood – I didn't hate this nearly as much as most of its ilk. Call it 2 out of 4 stars.