Seed: The Untold Story (screens Tuesday October 4th at the Capitol Theatre, one show only!)


[SEED: THE UNTOLD STORY screens Tuesday October 4th at 7:30 pm at the Capitol Theatre. One showing only.] 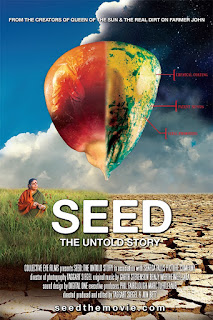 Early on in the documentary SEED: THE UNTOLD STORY we meet an amiable, bearded farmer named Billy. He is doing his best to preserve a wide variety of seeds, and with them, preserve some of the world's biodiversity for future generations. At one point he looks at a photo of his great grandmother and says, "I wish I could step into that photo and say, 'hi great grandma, it's me Billy. Can I have some of these', because I know for a fact that 90 something percent of the things are now extinct."

As agriculture has shifted over the past century from family farming to more of a big business, the variety of produce had decreased dramatically. According to the film, only about 120 varieties of plants are now grown and consumed on a regular basis, and 10 provide the sustenance for the majority of human beings on this earth.

So what, you might be saying. Well, to quote Billy again, "Genetic diversity is the hedge between us and global famine." Just ask the Irish, whose reliance on the "lumper" potato was the cause of the potato famine of the 1840s.

There are seed banks all over the world doing their best to preserve as many different species of edible plant as possible, but if a similar famine were to hit tomorrow, it's not as if one could just instantly plant something different and have it reach harvest in time to stave off starvation.

So how did we get here? Not surprisingly, big business is the villain. The very first ever lobbyist was hired by agribusiness to stop the U.S. government giveaway of seeds to farmers. Then they set out to create a seed that couldn't be saved.

Of course you know this is all leading up to Monsanto, the usual Devil in the agriculture debate. And there's certainly reason to feel that way, notably their efforts to gain the right to patent seeds. And not just the seeds, but any offspring of those seeds. Which means if any Monsanto seed happens to cross contaminate a non-Monsanto crop, it's an infringement of the company's rights. Thank Clarence Thomas, a former Monsanto attorney, for leading the court decision that made that the law of the land.

Less clear cut and convincing, to this reviewer, at least, are the arguments against GMOs. Are companies like Monsanto "playing God"? Maybe. Is that necessarily a bad thing, though? Depends on your point of view. Mine is that as long as the resulting creations are safe and help benefit humanity, I'm okay with it. And most scientists seem to agree that's the case.

But when delving into this area, SEED isn't particularly interested in science. Instead there's a whole lot of playing on emotions. And what better story to make the point about GMOs than the one an Indian woman tells of her Uncle, who lost his mind after a bad harvest of GMO crops and killed himself by drinking pesticide? In fact, 270,000 farmers have killed themselves in India. No doubt that's a tragedy. But blaming GMOs doesn't hold up to scrutiny. You'll have to research that information on your own, though, since the movie doesn't see fit to include it.

The movie is on surer ground when it talks about issues involving pesticides and chemical factories, but there's still an awful lot more in the way of emotional appeals than scientific evidence presented here. Just because a lot of people are protesting because they believe these chemicals have caused health problems doesn't mean they have. It doesn't mean they haven't, either. I'm just saying the film tends to rely more on anecdotes and emotion than hard evidence.

I'm no advocate for the false equivalency "show both sides" approach often taken by journalists when one side clearly has the evidence in its favor. But when it comes to GMOs, it's way to early to act as if a guilty verdict should be rendered. In fact, the preponderance of actual scientific evidence is against those raising the alarm. By ignoring these facts, SEED moves from the realm of true documentary and into the realm of propaganda.

Near the end the doc returns to advocating for more diverse and more naturally hardy crops. No problems there, and had the film stayed focused on this idea throughout it would have been easier to recommend. I also appreciate that co-directors Jon Betz and Taggart Siegel do a good job of making what could have been just another dreary parade of talking heads visually interesting with gorgeous shots that could only be called "seed porn" and some fun animated segments. I'd still recommend seeing the film; just be aware that you may want to do some additional research afterwards if you really want the full "untold story". 2 ½ out of 4 stars.
Posted by Bob Ignizio at 9:47 AM