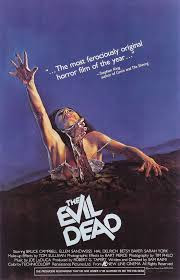 With the Brad Pitt/Angelina Jolie divorce once again reminding us that film is a morass of sleaze and moral degradation, Cinema Wasteland brings it on for a fall session.

In the spirit of such movie-memorabilia and nostalgia expos as the Monster Bash in Pittsburgh and DragonCon in Atlanta, Cinema Wasteland is a fan gathering, film marathon, variety show and vendor fair at the Holiday Inn Select of Strongsville.

Highlights of the latest edition include a 35th-anniversary salute to the original Michigan-shot EVIL DEAD. Sorry, no Bruce Campbell or Sam Raimi – they probably heard how bad the Browns were doing and didn’t dare get so close to Berea. But other actors and f/x artists will show up to meet and greet, alongside cast vets from THE TEXAS CHAINSAW MASSACRE, NIGHT OF THE COMET and other genre faves. Extreme-horror novelist Jack Ketchum and Cleveland rock photographer George Shuba round out the guest roster.

And dig the election-year special of THE WEREWOLF OF WASHINGTON, a 1973 Washington satire that has actually held up rather well in bits and pieces. Dean Stockwell is a DC press secretary who gets bitten by a gypsy lychanthrope in Europe and returns to the USA periodically turning into a Lon Chaney Jr.-style wolfman (actually pretty good retro-makeup). He tries to tell everybody about his curse, but the political establishment are such a bunch of self-absorbed pompous windbags they just don’t hear him above their own spin and blather. This Cleveland Movie Blog writer tried to get the Cleveland Cinematheque to show THE WEREWOLF OF WASHINGTON as a Halloween/Donald Trump special. The trendy-lefty University Circle types, probably too busy drooling over the prospect of President Hillary Clinton instituting Sharia Law and naming Fidel Castro to the Supreme Court, didn’t listen. But evidently Cinema Wasteland did.

Posted by Charles Cassady Jr. at 3:36 AM