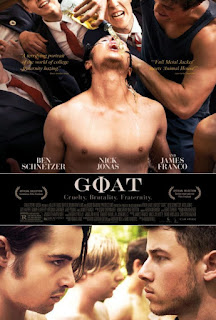 After leaving a party, Brad (Ben Schnetzer) gives a couple of townies a ride. They wind up beating and robbing him, which understandably traumatizes the 19-year-old. Nonetheless, Brad puts on a strong front as he heads off to college. His brother Brett (Nick Jonas) is already a student there, and a member of one of the campus fraternities, to boot. It only makes sense for Brad to pledge the same frat. But when it comes time for his initiation, what the fraternity calls "hell week", neither Brad nor his brother are prepared for the level of brutality and humiliation.

But it's not the goal of GOAT to delve that deeply into the cesspool of Greek life. Its focus is squarely on the hazing, and with regard to that it does a good job of showing just how perverse that can be. Aside from simple verbal and physical abuse, the recruits are forced by their future brothers to engage in a whole lot of homoerotic/homophobic stuff. There's even the threat of having to engage in sex with an actual goat if they can't drink enough in a certain amount of time. At some point, though, it becomes difficult to feel sorry for anyone stupid enough to willingly partake in this kind of abuse just so they can be part of some stupid campus clique and lord it over others.

Based on a true story adapted by David Gordon Green, Mike Roberts, and director Andrew Neel, GOAT is part sincere cautionary tale, part exploitation film. This sort of thing really does happen (the case depicted here took place at Clemson in South Carolina), and it's awful. So are a lot of things about fraternities, like their overt misogyny and celebration of binge drinking. Real frat guys are rarely if ever the lovable losers of ANIMAL HOUSE or REVENGE OF THE NERDS; they're more like budding Patrick Batemans.

The film is reasonably well made, but it can't help coming off as a slightly edgier "After School Special" to some degree. And like those made for TV staples of the seventies and eighties, GOAT runs the risk of being mocked by the very audiences it's trying to reach, or even worse, making the Greek life look appealing. Sure, you have to go through a lot of shit, but after that it's PAR-TEE!!! If nothing else, it's worth a watch for the lead performances by Jonas and Schnetzer (the rest of the frat kids are all stereotypical snobby rich kid types), and for James Franco's bit part as an ex frat member who comes back to visit during pledge week, sadly trying to recapture what one can only assume was the highlight of his life. 3 out of 4 stars.
Posted by Bob Ignizio at 12:00 AM