*NOTE* - This review was previously published under the assumption that the film had opened on September 16th. The release date was pushed back. We at the Cleveland Movie Blog apologize for any confusion. 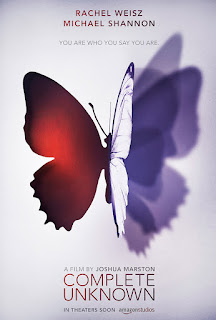 In COMPLETE UNKNOWN, Rachael Weisz plays Alice, a woman who changes identities and professions as easily as most of us change our socks. When we first meet her, she's working as assistant to a Chinese magician. Evidently tired of this particular life, she does a disappearing act of her own. When she turns up next, she's in America passing herself off as a scientist studying frogs. It is in this guise that she encounters Tom (Michael Shannon). Although Tom, for his part, is certain that the two have met before.

Director Joshua Marston, who co-wrote the film with Julian Sheppard, allows the story to unfold slowly, creating an atmosphere of uncanny mystery and romantic tension as he does so. The film also benefits from its two leads, both of whom deliver enthralling performances that compel the audience to stick with the film, certain there must be something of interest just around the bend, some twist of the plot or some deeper theme. Yeah, not really.

I guess the brief scene with Danny Glover and Kathy Bates encountering the two leads has something to say about how we all reinvent ourselves to some degree, albeit in a considerably less extreme manner than Alice. But that's only the halfway point of the film. It keeps slogging along after that, seemingly promising some sort of reward for sticking it out to the end, only to leave us with the cinematic equivalent of a shrug.

Watching COMPLETE UNKNOWN, I was reminded of THE TALENTED MR. RIPLEY and it's earlier French adaptation, PURPLE NOON. Of course COMPLETE UNKNOWN has none of the crime fiction genre trappings of the RIPLEY films, but somehow it feels more contrived. A good part of that probably comes down to Ripley's reasons for changing identities being easier to understand and relate to than the vague motivations ascribed to Weisz' Alice. But even on a thematic level, it feels as if there's more substance in the pulpy tales of Tom Ripley than there is here.

Is it possible I'm missing something? Sure. Or, just maybe, there really isn't anything here beyond an intriguing surface of stylish direction and solid acting. All I can relate is my experience of the film, and that experience was one of frustration and boredom, made worse by the fact that some aspects are good enough to engender hope in the viewer that the film will ultimately add up to more than it does. 2 out of 4 stars.
Posted by Bob Ignizio at 12:00 AM