Cleveland Cinemas Wants to Scare Your Pants Off in October 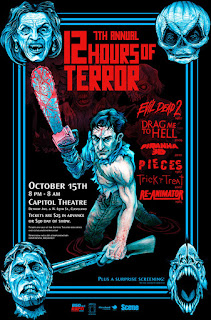 October promises to be a terrifying month for movie-goers in Cleveland thanks to the scary line-up of creepy and occasionally kooky films presented at various Cleveland Cinemas locations.


PSYCHO – A Phoenix secretary (Janet Leigh) steals $40,000 from her employer's client, goes on the run and checks into a remote motel run by a young man (Anthony Perkins) under the domination of his mother. This masterpiece by Alfred Hitchcock made millions of people scared of showers.
Cedar Lee Theatre (2163 Lee Rd., Cleveland Hts):
Saturday, October 1st at 9:30 PM and midnight
Sunday, October 2nd at 7:00 PM
Tickets $6


NIGHT OF THE LIVING DEAD – George Romero’s zombie movie masterpiece launched an entire genre of horror films.
Part of the Reel Science Series featuring and introduction and Q&A by Dr. Nichole Burt, Curator of Human Health and Evolutionary Medicine at the Cleveland Museum of Natural History.
Cedar Lee Theatre (2163 Lee Rd., Cleveland Hts):
Wednesday, October 5th at 7:00 PM
Tickets $7.50 ($5 for CMNH and Cleveland Cinemas Marquee Rewards members)
PHANTASM RAVAGER – The cult favorite Phantasm series comes to close as Mike and Reggie join forces across time and space to finish off the Tall Man once and for all.
Friday, October 7th at 10:00 PM
Saturday, October 8th at 10:00 PM
Capitol Theatre (1390 W. 65th St, Cleveland)
Tickets $9.50
THE GREASY STRANGLER – By day Ronnie runs a disco walking tour. By night he’s something even more terrifying. A don’t miss WTF cinematic experience for fans of films that defy conventions of good taste. No one under 18 admitted.
Friday, October 7th at midnight
Saturday, October 8th at midnight
Capitol Theatre (1390 W. 65th St, Cleveland)
Tickets $9.50
SHIN GODZILLA – Make way for the ultimate homage to one of the most enduring legends of the big screen—Godzilla! The King of the Monsters is back in Tokyo for a city-crushing crusade that speaks to the very roots of the world-renowned franchise. In Japanese with English subtitles.
Tuesday, October 11 at 7:30 PM
Wednesday, October 12 at 7:30 PM
Thursday, October 13 at 7:30 PM
Saturday, October 15 at 1:00 PM
Tuesday, October 18 at 7:30 PM
Tower City Cinemas (230 W. Huron Rd., Cleveland)
Tickets $9.50
12 HOURS OF TERROR – 7th annual all-night horror movie marathon featuring Evil Dead 2, Drag Me to Hell, Piranha 3D, Pieces, Trick ‘r Treat, Re-Animator and a surprise secret screening.
October 15th 8 PM – 8 AM
Capitol Theatre (1390 W. 65th St, Cleveland)
Tickets $25 in advance ($30 day of show)
Admission includes continental breakfast.
THE PIT – Twelve-year old Jamie is one creepy kid. He has a perverse obsession with sex, his only friend is an evil teddy bear, and he’s the only one who knows about the hole in the forest where he feeds raw meat to a ravenous pack of mutant troglodytes. But Jamie will teach them all a lesson, the kids who teased him, the mean old lady down the street, even his pretty new babysitter. Soon they—and his entire town—will face the flesh-eating horror of The Pit!  This Canuxploitation horror classic is playing from a new 2K digital restoration!
Tuesday, October 18th at 7:15 PM
Saturday, October 22nd at midnight
Capitol Theatre (1390 W. 65th St, Cleveland)
Tickets $9.50
HENRY: PORTRAIT OF A SERIAL KILLER – HENRY: PORTRAIT OF A SERIAL KILLER is a chilling profile of a cold-blooded killer that, 30 years after its historic festival premiere, has lost none of its power to shock. The film, loosely based on a true story, has been hailed as one of the most disturbing and terrifying examinations of mass murderers ever filmed. Henry (Michael Rooker) is a psychopathic drifter who has coldly murdered a number of people for no particular reason and without any remorse. Leaving bodies in his wake, Henry makes his way to Chicago, where his he settles into the run-down apartment of his drug-dealing former prison friend and occasional roommate Otis (Tom Towles). Also moving into the space is Otis’s younger sister Becky (Tracy Arnold), who is fleeing her abusive husband. As she fends off her brother’s incestuous advances, Becky finds herself attracted to Henry – unaware that he, along with Otis, are continuing their murderous rampage. New digital restoration.
Saturday, October 22nd at midnight
Thursday, October 27th at 7:30 PM
Capitol Theatre (1390 W. 65th St, Cleveland)
Tickets $9.50
FREAKS – A circus' beautiful trapeze artist agrees to marry the leader of side-show performers, but his deformed friends discover she is only marrying him for his inheritance. Legendary horror director Tod Browning’s controversial cult classic was once banned for 30 years in the United Kingdom.
Wednesday, October 26th 6:00 PM (Happy Hour cocktail reception), 7:00 (film)
Capitol Theatre (1390 W. 65th St, Cleveland)
Tickets $10
Part of the Happy Hour Classics Series. Admission includes a mini cocktail and appetizers from Toast as well as live music in the lobby before the show.
WALLACE & GROMIT : THE CURSE OF THE WERE-RABBIT – Wallace and his loyal dog, Gromit, set out to discover the mystery behind the garden sabotage that plagues their village and threatens the annual giant vegetable growing contest.
Apollo Theatre (19 E. College St., Oberlin):
Thursday, October 27th at 10:00 PM
Friday, October 28th at midnight
Saturday, October 29th at 10:00 AM
Tickets are $5 for the Apollo Theatre screening
Cedar Lee Theatre (2163 Lee Rd., Cleveland Hts):
Saturday, October 29th at 11:00 AM
Sunday, October 30th at 11:00 AM
Tickets for the Cedar Lee Theatre $1 as part of the $1 Family Film Series
I DRINK YOUR BLOOD – A group of hippies wreak havoc on a small town and a young boy, whose grandfather and sister were attacked by them, decides to get even, with deadly results. This 1970 grindhouse horror classic has now been digitally restored and looks better (and more gruesome) than ever.
Friday October 28th at midnight
Saturday, October 29th at midnight
Cedar Lee Theatre (2163 Lee Rd., Cleveland Hts)
Tickets $9.50
Tickets are available at the theatre box office and www.clevelandcinemas.com.
Posted by Bob Ignizio at 10:02 AM