[THE CHILDHOOD OF A LEADER screens Thursday September 15th at 8:40 pm and Saturday September 17th at 8:30 pm at the Cleveland Cinematheque.] 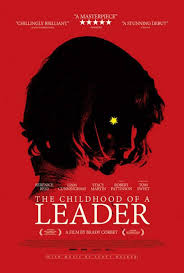 Like Quentin Tarantino's recent film THE HATEFUL EIGHT, THE CHILDHOOD OF A LEADER is presented as an old-school road show epic. It opens with a tense overture showing the end of WWI, including lots of shots of grateful Europeans holding up “vive Wilson” signs. The overture culminates in our first glimpse of the future despot of the title, Prescott (Tom Sweet), dressed as an angel for a church Christmas play. But this child is anything but angelic. More like a bad seed.

This is followed by a seemingly casual scene in which two men, one of them the boy's father (Liam Cunningham), play pool while having a philosophical discussion that lays out the film's themes. The younger man (Robert Pattinson) argues that the tragedy of the recently ended great war occurred because, “not that one man had the courage to be evil, but that so many have not the courage to be good.”

And I suppose we see that playing out again, as Prescott's mother (Bérénice Bejo), nanny (Yolande Moreau), French teacher (Stacy Martin), and the Priest at his church (Jacques Boudet) all fail to guide this troubled young man down the righteous path, frequently excusing and coddling him instead.

As realized by Brady Corbett's direction (from a script he co-wrote with Mona Fastvold), it all adds up to an enthralling cinematic experience that nonetheless fizzles out by the time Prescott becomes an adult dictator, also played by Pattinson. The frenetic score by Scott Walker adds a sense of importance and urgency to the proceedings. It's a compelling and highly watchable film, but one that isn't nearly as important or revelatory as it seems to think it is. 2 ½ out of 4 stars.
Posted by Bob Ignizio at 12:17 AM