The New World (August 7 at 7:15 p.m. at the Cleveland Cinematheque) 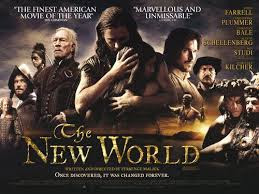 Filmmaker Terence Malick attempts numerous audacious and foolhardy things
in the lyrical, trance-like 2005 historical drama THE NEW WORLD, pulling off some of them beautifully. Among his victories is giving us tabloid-bait actor Colin Farrell as a character who would have to sign any motel register as "John Smith." And yet you don't giggle.

Yes indeed, it's Malick's impressionist retelling of the Pocahontas story and the settling of Jamestown, Virginia. It envisions the childhood of Anglo-America as an experience of first-love adolescent romance and heartbreak, the bittersweet deflowering of a virgin continent. With the canny casting of Farrell the feature manages the formidable achievement of reclaiming the Pocahontas legend from elementary-school pageants and the seemed-like-a-good-idea-at-the-time Disney musical cartoon POCAHONTAS, with its chorus line of raccoons and singing Mel Gibson. In fact, the `P' word is never spoken here.

A lot is never spoken here, in a sparsely-dialogued presentation. Characters seldom raise their voices above hushed whispers - it actually looks pretty silly, when Smith mutters an order to the ground, and guys standing 50 yards away instantly obey. He arrives in 1607 literally in chains with the first company of English colonists. Sentenced to hang for some vague past offense of mutiny, the downcast Smith is given clemency and a chance to redeem himself by helping the small band of fortune-seekers make their stand on a bit of swampland and survive until the next supply ship from King James (a briefly-glimpsed Jonathan Pryce).

Key to their survival turns out be relations with what the patrician
expedition commander (Christopher Plummer) calls `the naturals.'  It's a superb first-contact moment when the natives encounter the strangers, even though the usual politically-correct Aquarian-Age cliches are firmly ensconced. The tribespeople are healthful, Edenic, unspoiled unselfish, non-denominationally spiritual. The Europeans (all male, initially) are shifty, scurvy, lice-ridden, Bible-spouting, and comically encased in clunky conquistador armor. It's a white man and his gun who kills first. I guarantee Marlon Brando would have approved this film.

Told of an influential chief Powhatan who could prove valuable to know,
Smith ventures further inland and attempts to negotiate. Despite the lack of any common language, the two sides don't seem to have much trouble comprehending each other, and Powhatan (Canadian native actor August Schellenberg) is about to have Smith executed when the chief's nameless favorite daughter (Q'orianka Kilcher) intervenes and saves the sullen newcomer. She's been espying the Europeans from afar, and has an attraction to Smith.

Thanks to "the princess" (Pocahontas is eventually called by her adopted melting-pot tag, `Rebecca'), the colonists survive a grim period of near-starvation. But they do a lousy job expressing their gratitude to the naturals, and THE NEW WORLD goes well beyond the Disney version in showing why she and John never become, well, Mr. and Mrs. Smith. Christian Bale appears late in the movie as her new suitor, a gentle farm widower who brings greater fidelity and mutual respect to the relationship and threatens to give Christianity and western civilization a good name.

Despite yeoman work from all the actors, though, the characters hardly seem more than monumental symbols, posing stolidly and uttering Malick's peculiar lines and introspective haiku-like voiceover soliloquies ("It is I. A dream. Where are you my love? Can love lie?") in an Arcadian setting of birdsong and low soundtrack chords borrowed from Wagner and Mozart. As much a magnetic rogue as Farrell's feral John Smith is supposed to be, you'd think the director would have at least asked him to button up his shirt when the action switches to the frozen north.

The mood and anthropological detail (including special thanks to archaeological digs at the Jamestown site) indicates that Malick had been studying up on his Werner Herzog, and while this is without the darkness of AGUIRRE THE WRATH OF GOD, THE NEW WORLD succeeds in evoking a span of the past in which Europe's foothold on these wild shores was barely tenuous and white people were not top of the food chain. Even the filmmakers seem to be at a loss to how Jamestown survived, and Malick simply cuts away from a battle scene of decimated Jamestowners fighting a hostile native onslaught. Rightfully, it seems, the story should have ended right there.

If viewers leave the theater marveling in wonder that the concrete-and-neon strip malls, the shoebox multiplex and the Wal-Mart edifice they're walking past, were unplowed, untamed verdure just a few centuries ago, then THE NEW WORLD will have done its job. If enough viewers try this cinematic reverie, there's one potential positive outcome. `The Naturals' makes a far more apt Major League baseball team title than `the Indians'; yet it allows Wahoo fans to retain their precious grinning logo and bobbleheads. (3 1/4 out of 4 stars)
Posted by Charles Cassady Jr. at 2:11 AM