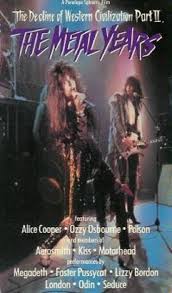 Director Penelope Spheeris came to prominence in 1981 with her punk-rockumentary THE DECLINE OF WESTERN CIVILIZATION. In 1988 she encored with a second installment of rock-musical freak sideshow stuff. This one was shot on a visibly larger budget. And for this go-around it's a carnival of preening black-leather hedons and poseurs of the hair-metal decade, resplendent in lurid arena-rock excess in Los Angeles, onstage and in self-aggrandizing interviews.

The mullet-wearing interviewees render opinions of drugs (against), alcoholism (for! for!), selling out (for), satanism (for), exploiting women (you betcha!). "Rock and roll is basically music made by people who were thinking with their crotches," said Paul Stanley of KISS, cuddling in bed with three Stepford groupies.

Meanwhile future reality-TV dad Ozzy Osbourne states if weren't a rock star he'd be in prison (almost immediately gangsta rappers stole that line for themselves in practically all their hip-hopumentaries). On a similar note, a probation officer discusses "de-metaling" lawbreaking rock fans.

Chris Holmes of W.A.S.P, at a pool with his mother nearby, oozes drunken  self-loathing. Alice Cooper, Gene Simmons and the late Lemmy from Motorhead come across as fairly lucid and clued-in, and Steven Tyler of Aerosmith does a "say no" routine about drugs - but not before bragging that "all of Peru" went up his nose.

Spheeris has confessed to staging at least some of this. Let's hope so. A few enterprising journos have done whatever-happened-to? pieces on some of the younger up-and-coming "artists" shown in this film; most of them said they were extremely drunk at the time and it was mostly the alcohol doing the talking. Then again, Bob Dylan has said that DONT LOOK BACK badly misrepresented him too. So there.

While undeniably a snapshot of its place, time and mindset spawned by the money-grubbing ass-end of greed-fueled American culture of the 1980s that the Ronald Reagan worshippers don’t want to talk about (but were happy to profit from), and valuable as such as pop culture, one does kind of get the feeling of less actual discovery of a music inner circle that the first DECLINE provided. And more of a carefully guided shock-tour done for the cash (it is a sequel, after all). Pity the title THE GREAT ROCK AND ROLL SWINDLE had already been taken. (2 3/4 out of 4 stars)

Posted by Charles Cassady Jr. at 7:25 AM