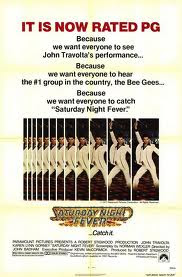 SATURDAY NIGHT FEVER was a runaway hit that became such an icon of its 1970s disco-music milieu that the white costume John Travolta wore in the dance-contest finale is now on permanent exhibit in the Smithsonian Institution (after being famously owned by film critic Gene Siskel). But viewers with childhood memories of the blockbuster might have forgotten (especially with the alternate version; more on that later) that this movie is no fluffy song-and-dance or a plot-lite MTV collection of pop fantasy like FLASHDANCE. Rather, it's a tough and serious-minded drama about restless, sometimes violent young men on the sordid side of New York City. You remove all the dancing  from SATURDAY NIGHT FEVER and you'd still be left with a sturdy, well-acted production (but it sure wouldn't be the same).

John Travolta, already a rising young TV star at the time, made his big-screen breakthrough as Tony Manero, a vulpine 19-year-old Brooklynite. He lives uncomfortably at home with several generations of his Italian-American family (headed by a cranky, laid-off father), works a low-level job at a local paint store, hangs out with a trouble-prone pack of pals (he's more or less leader of their gang), and treats marriage-minded girlfriend Annette (Donna Pescow) with contempt, partially because she won't have sex with him. Tony's main escape is on the illuminated floor of a glittery club called - anyone remember the name? - 2000 - where he's the star and his dance moves take him to a fantasy world away from a dead-end routine.

While dancing Tony meets a local girl named Stephanie (Karen Lynn Gorney) who has a secretarial job in a Manhattan music agency and intends to improve herself, via dance lessons and moving across the bridge to the heart of the glamorous city. Tony coldly dumps Annette as his dance partner in the upcoming annual dance competition at the club and starts training with Stephanie instead. She challenges Tony to grow up too - but Stephanie's no angel; it's hinted that she's also had the advantage of being the mistress of her married boss.

With his gang's ongoing feuds and girlfriend crises and his family problems in the background (Tony's favored older brother decides to quit the priesthood), the hero has a fateful turning point on the night of the dance contest. To his everlasting credit Travolta fought to keep his character raw and occasionally cruel, and that's why Tony Manero works so well (Travolta received an Oscar nomination for Best Actor). It's because he can dance - and appreciate good dancing, even by hated minorities such as blacks and Puerto Ricans - that Tony can perceive a better future than this environment can give him.

If you were to replace the wall-to-wall disco with hip-hop and make the actors Afro-American instead, you'd have a rap-heavy movie, of the type that, decades later, made even lawmakers cringe (there's an especially strong resemblance to 8 MILE, think about it). Even though the Bee Gees music and bell-bottom trousers tend to inspire rosy, nostalgic and semi-campy memories, the film itself packs a punch.

Amazing Fun Fact #1: SATURDAY NIGHT FEVER was based on a nonfiction Rolling Stone magazine article. "Tribal Rites of a Modern Saturday Night," by Nik Con, and after the movie's success one guy actually sued, claiming the filmmakers had ripped off his real life - and no, it wasn't me; the hardware and paint stores keep turning down my applications. Amazing Fun Fact #2: Much later Nik Con claimed he lied - he'd made up all the people "interviewed" in the piece. Amazing Fun Fact #3: Even so, Nik Con would be hired over Charles Cassady Jr. in any media job, especially in Cleveland. Okay, maybe that last one is more a Predictable Fun Fact. Clevelanders would hire Casey Anthony as babysitter or Amanda Knox as roommate material over me.

Actual Amazing Fun Fact #3: Even Hollywood of the era thought SATURDAY NIGHT FEVER was unusually profane and explicit, and when it went into re-release and home-video Paramount circulated it widely in PG-rated form (today this version would be considered a PG-13, at least), using alternative, softer versions of key scenes that director John Badham shot simultaneously, to tone down the material for network TV airings. Yes, we sophisticated grownups who learned to stop worrying and love the f-word can bemoan corporate censorship and all that - but for what it's worth, Badham has gone on record saying he thinks the

more subtle PG version has better acting. Might be a lesson in there, huh young filmmakers?

In 2002 the coarser R-rated edition apeared on DVD. In 1983, as the 1980s were really turning into a Decade of BadSequelMaking Dangerously, a PG-rated encore was made called STAYING ALIVE, directed by Sylvester Stallone. It followed Tony's efforts to turn his dancing talent into Broadway stardom. STAYING ALIVE...does not have any display in the Smithsonian, let's put it kindly as possible for Easter season.