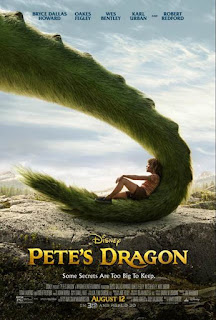 The original 1977 PETE'S DRAGON was a musical about an orphan boy with a magical dragon for a friend who runs away from his abusive foster parents, only to find himself in a town of superstitious folk who don't treat him much better. Now Disney and director/co-writer David Lowery have remade the tale as a softer, environmentally conscious film minus the production numbers and abuse subtext. The main human character, Pete (Oakes Fegley), has also been reimagined as something of a wild boy ala Tarzan or Mowgli, raised not by foster parents, but by his dragon friend Elliot, since his real parents died on a camping trip when he was 5 years old. Hey, it may be toned down a bit, but you still can't have a Disney film without the lead kid's parents getting offed.

After six years surviving in the woods with his dragon, Pete is discovered by forest ranger Grace Meachum (Bryce Dallas Howard), who takes the boy, who has befriended her daughter Natalie (Oona Lawrence), back to civilization. She doesn't believe Pete's stories about living with a dragon, of course. Heck, she doesn't even believe her own father (Robert Redford), who has been telling her for years that he was just such a beast when he was younger.

Meanwhile, Grace's husband, a logger, is doing his best to keep his not-so-environmentally conscious brother Gavin (Karl Urban) from cutting down trees they aren't supposed to, and just in general being a not so nice guy. Of course Gavin winds up encountering the dragon, and being the no-goodnik of the piece, he decides to hunt it down, catch it, and somehow "make a fortune" off the beast in the way all such no-goodniks in movies about magical creatures dream of.

In short, it's pretty standard issue fare of its kind. The cast is solid, the CGI dragon works well, and there's a good balance of light hearted humor, action, and schmaltz, and the environmental message is well integrated. In lieu of the original's song and dance numbers, here we get folk songs utilized as a sort of Greek chorus. Sure, there are some issues (like why a kid who had been with his parents for 5 years before turning wild boy would be baffled by a peanut butter and jelly sandwich. I have a 5 year old. He's known what those are since he could eat solid food, and I doubt a few years in the woods would erase his knowledge of them), but overall it's an entertaining family film. Oh, and if you were thinking about seeing this in 3D, don't. The film makes very little use of the process, so you'll just be wasting money if you shell out for the glasses. 2 ½ out of 4 stars.
Posted by Bob Ignizio at 12:00 AM