Indie Gathering Bringing Aloha to Film Festival with 'Get a Job' 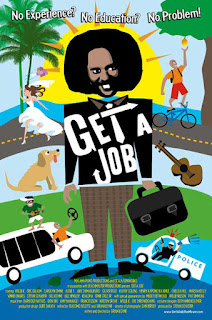 GET A JOB is coming to Cleveland. The raucous, slapstick comedy from Hawaii with the killer soundtrack was awarded Best Comedy at the Indie Gathering Film Festival in Hudson, Ohio. The Indie Gathering has something for everyone, especially comedy & horror and runs August 8th thru August 14th at the Clarion Inn and Conference Center. http://www.theindiegathering.com/location.php

GET A JOB features 24 original songs. Director Brian Kohne built the movie around the soundtrack. The full feature stars Willie K and Eric Gilliom. They are two friends attempting to find the dignity of employment while bumbling through life and sharing the Aloha Spirit in Hawaii. Funny experiences enhance their journey while they share their special musicality and hilarious charms. They are backed up by world-class entertainers such as Mick Fleetwood, Willie Nelson, Pat Simmons of the Doobie Brothers, Henry Kapono, Carolyn Omine, Kathy Collins and Augie T. Jake Shimabukuro plays a mean ukulele in the tourist scene. Kohne, who has Ohio roots, shows why he is such a creative force by blending the music seamlessly.
https://vimeo.com/71337167

Other special attractions are the FX special effects competition and the fight scene choreographic competition. Veteran director Gary Jones will be in attendance as will Halloween personality Jason MCcallister as Skippy the Evil Clown.
Posted by Bob Ignizio at 12:04 PM