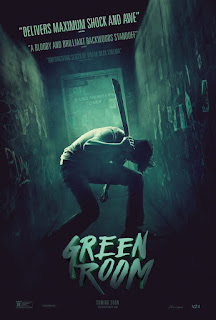 Unfortunately, we weren't able to cover GREEN ROOM during it's theatrical run. I recently had the chance to watch it on home video, though, and felt it was very much worth giving some attention to.

If nothing else, I have to give GREEN ROOM props for getting the details of being a low level touring punk rock band right. Four people driving across the country in a shitty van (played by Anton Yelchin, Alia Shawkat, Joe Cole, and Callum Turner) to play music in shitty clubs. Siphoning gas because they can't afford to pay for it. Arriving in the next town to find out the gig has been cancelled, and taking another, shittier one just to get a few bucks for food. Doing interviews with podcasts and zines hardly anyone will ever read or listen to, but treating them with the seriousness of a Spin Magazine (or at least Maximum Rock N Roll) feature piece. It's obvious that writer/director Jeremy Saulnier knows this world.

He also knows a thing or two about making a well-crafted thriller.

After playing a last minute gig at what turns out to be a neo-Nazi club, and where, in true punk rock fashion, the band decides to thumb their noses at the audience by covering the Dead Kennedys' "Nazi Punks, Fuck Off", our luckless musicians just want to get paid and get back on the road. Unfortunately, they witness a murder, and club owner Darcy (Patrick Stewart) decides the only way to insure they keep quiet is if they're dead.

The band members are by no means bad-asses, but they do their best to survive, and the movie makes us believe at least some of them have a chance. They also get help from another witness marked for termination (Imogen Poots).

There's really not much more to the plot other than the tried and true grindhouse action formula of "who will survive and what will be left of them", but the attention to detail, solid performances all around, and taut direction raise it to a level above typical genre fare. It's not quite as compelling as Saulnier's previous film, the "revenge isn't all it's cracked up to be" actioner BLUE RUIN, but it's still fine bit of violent entertainment made with intelligence and style. 3 out of 4 stars.
Posted by Bob Ignizio at 12:00 AM