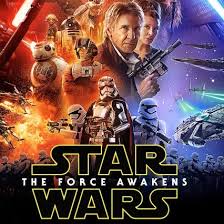 You would think that a place like hippie-influenced Coventry Road, in Cleveland Heights at a place called P.E.A.C.E. Park, a movie with a title like "Star Wars," mostly oriented around fiendish space weapons and fighting, would get even less of a warm welcome than the Republican Convention. But it's Cleveland, go figure. Originally Coventry Village this year had planned a gala three-day consecutive series of Star Wars nights, showing each entry in the original 1977-1983 trilogy for free in the open air, Thursday-Friday-Saturday.

But then came a cease-and-desist from the distributor. Nothing personal, just business; you can't do that. The original films are sort of retired from circulation (Disney - now owner of the franchise - pulls that sort of thing a lot).

But, in a bit of compensation, Coventry Village has fallen back on a booking of 2015's followup STAR WARS: THE FORCE AWAKENS for a free public screening Saturday night at 9 p.m. And surrounded it with a day-long mini-festival of Star Wars-y goodness.

After the movie, around 11 p.m., a "bar wars" pub crawl takes place for grownups.

Personally, after the rug getting whipped out from us like that, a good substitute choice might have been a bootleg of THE STAR WARS HOLIDAY SPECIAL, just to bum out everyone. But evidently that sort of vengeance just doesn't fit today's tamed Coventry vibe.

Posted by Charles Cassady Jr. at 2:27 AM