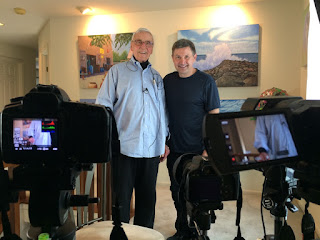 Sometimes a crisis helps you create something extraordinary.

"Lines of Sight" is the inspiring story of noted painter Jim “JC” Hall from Henry
County, Kentucky. It traces Jim’s journey through incredible hardships and his
development of a new artform he calls Lineillism. Jim created the style after a stroke
and shingles marred his vision so that he saw the world in vertical lines. At first, Jim
panicked. Then, he painted. Filmmakers capture every one of the more than 500,000
vertical brushstrokes that go into these paintings with dramatic timelapse
footage. Jim continues to be an innovator at the age of 83. The documentary was made for under
$10,000.


Artist Jim "JC" Hall had been painting for more than 60 years when a stroke and
devastating case of Shingles threatened to ruin his sight and end his passion. For
months, his vision was marred by vertical lines. Then, Jim's sight cleared and
the crisis created a burst of creativity that has been going strong for nearly 15 years. He painted
the world how he saw it during his bout with Shingles.

Jim calls the style "Lineillism," a new style of painting, using vertical lines. The
paintings take more than a month to produce and feature more than 500,000 lines of
varying lengths. The innovative new style has captivated collectors across the country.
Jim staged a well reviewed exhibition of more than 30 Lineillisms in 2010.

When filmmaker Steve Oldfield approached Jim about a documentary, his chief concern
was that they paint a revealing portrait, sharing some of his most difficult and painful
memories. Jim's journey began on a sharecropper's farm in Kentucky with an abusive
father who shot a man. As soon as he was old enough to leave home, Jim moved to
California where he found himself homeless on the beach in Santa Monica. After a stint
at UCLA, Jim ended up working as an ad man for Procter and Gamble, affording his
family a comfortable suburban life in Ohio that wasn't what it seemed: Jim battled
depression and alcoholism and endured electro shock therapy and several intense
treatment centers until he finally joined AA. Jim now has 33 chips that honor more than
three decades of sobriety.

All the while, Jim has evolved as an artist: from early paintings on planks of wood on
the farm to creating elaborate canvases featuring his trips to exotic locales (funded by
his work as a P&G executive). For several decades, Jim was represented by one of the
most respected galleries in the Midwest. Last year, Jim lost the rock of his life, his wife
Joan, a life coach who left inspirational lines all over the house.
Lines of Sight

Jim wasn't sure he could go on painting without his wife's support. But a year later, he
has experienced another rebirth. He continues to paint and to spread an inspiring
message of hope.

In addition to telling Jim's incredible story and revealing the inspiration for more than
a dozen of his prized Lineillism paintings, the filmmakers crafted a "canvas cam", that
uses time lapse photography to capture the entire monthslong
process of painting a Lineillism.

Other interviews include family members, friends, Lineillism collectors across the
country and a painting expert who examines this new technique. Jim's personal journey
also creates a compelling story. Here is a man who was once won a contest as
"Cincinnati's greatest Bengals (football) fan". While he seemed like a model employee
at one of the world's biggest corporations, Jim was battling depression and alcoholism
and mixing Vodka with his oil paints. He was subjected to everything from toughlove
programs and interventions to electroshock therapy. Jim credits AA and the support of
his late wife, Joan, with helping him to stay sober. Joan was a life coach whose
presence Jim feels every day; from when he glances at the inspirational lines she taped
up all over the house to when he experiences her presence throughout the day and in
dreams at night.

Jim Hall hasn't just created an important new painting technique that inspires artists
of all ages; his personal story will captivate audiences everywhere.
Posted by Bob Ignizio at 12:00 AM