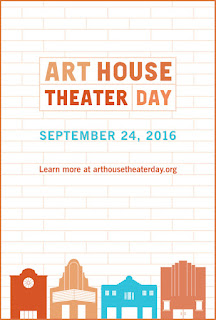 In an age where media has become more digital than tangible, more solitary than social, art house theaters remain physical spaces where film lovers can congregate and connect with each other around intrepid, creative filmmaking. Art houses nurture an ecosystem of adventurous audiences and independent productions, and function as economic drivers in their communities.


In addition to their regularly scheduled films, the Cedar Lee Theatre and Capitol Theatre will feature the following special programs, promotions, Q&A’s and collectible merchandise as part of Art House Theater Day.
A TOWN CALLED PANIC: THE CHRISTMAS LOG & RETURN TO SCHOOL
Theatrical premiere!
Saturday, September 24th at 1:00 PM
Cedar Lee Theatre
Come visit A TOWN CALLED PANIC, with two award-winning new specials from the Academy Award-nominated directors of ERNEST & CELESTINE. Cowboy and Indian are always up to some hare-brained scheme, with Horse left to clean up the mess. In THE CHRISTMAS LOG, their out-of-control antics lead Horse to call Santa and cancel their presents. In BACK TO SCHOOL, a class assignment yields a special prize, but only Pig knows the answer.
TIME BANDITS
FREE limited edition Time Portal Map designed by Terry Gilliam while supplies last!
Saturday, September 24th at 4:00 PM
Cedar Lee Theatre & Capitol Theatre
New 2K digital restoration of Terry Gilliam's 1981 film in which a young boy accidentally joins a band of dwarves as they jump from era to era looking for treasure to steal.
DANNY SAYS
Theatrical premiere! Followed by a streaming Q&A from New York City with key talent from the film
Saturday, September 24th at 7:00 PM
Cedar Lee Theatre
Danny Says, directed by Brendan Toller, is a documentary on the life and times of Danny Fields, who since the 1960’s has played a pivotal role in the music and culture of the late 20th century. Fields worked with legendary artists like the Doors, Cream, Lou Reed, Nico, and Judy Collins, and managed groundbreaking acts like the Stooges, the MC5 and the Ramones.
Merchandise for sale for Danny Says: Limited edition t-shirt featuring one of Danny’s home photos of Dee Dee Ramone.
AUTHOR: THE JT LEROY STORY
In person Q&A with director Jeff Feuerzeig
Saturday, September 24th at 7:00 PM*
Capitol Theatre
On January 9, 2006 The New York Times sent shockwaves through the literary world when it unmasked "it boy" wunderkind JT LeRoy, whose tough prose about a sordid childhood had captivated icons and luminaries internationally. It turned out LeRoy didn't actually exist. He was the creative expression of 40-year-old San Francisco former phone-sex operator turned housewife, Laura Albert. Author: The JT LeRoy Story takes us down the infinitely fascinating rabbit hole of how Laura Albert - like a Cyrano de Bergerac on steroids - breathed not only words, but life, into her avatar for a decade. Albert's epic and entertaining account plunges us into a glittery world of rock shows, fashion events, and the Cannes red carpet where LeRoy becomes a mysterious sensation.
*Note that Author: The JT LeRoy Story will be playing for additional shows as a regular engagement starting on September 23rd. Only the 7:00 show on September 24th will feature the director Q&A.
PHANTASM
Followed by streaming Q&A from Fantastic Fest with director Don Coscarelli and cast from the film
Saturday, September 24th at 8:00 PM
Capitol Theatre
New digital restoration of Don Coscarelli's 1979 horror classic. A young boy and his friends face off against a mysterious grave robber known only as the Tall Man, who keeps a mysterious arsenal of terrible weapons with him.
Merchandise for Phantasm: Special edition MONDO t-shirt and pin will be on sale exclusively at Art House Theatre Day locations.
CONCESSIONS SPECIAL
In addition to these special programs, the Cedar Lee Theatre and Capitol Theatre will be offering a free fountain drink with any popcorn purchase. Buy any size popcorn on September 24th and receive the same size fountain drink for free.
SEASON PASS DRAWING
Patrons visiting the Cedar Lee Theatre or the Capitol Theatre on September 24th will have a chance to enter a special drawing to win a Cleveland Cinemas season pass. This pass will be valid for the winner and a guest to attend unlimited films for one year at any Cleveland Cinemas location.
“Art House Theater Day is a chance to show film-lovers that their local theaters are part of a larger cultural movement. These cinemas are not passive, insular venues––they are passion-driven institutions that collaborate with distributors, filmmakers, and each other to deepen film appreciation and to increase the diversity and artistic integrity of what you see on the big screen,” said Art House Theater Day cofounder Gabriel Chicoine.
“We are excited to participate in the first annual Art House Theater Day,” says Jonathan Forman, President of Cleveland Cinemas. “Both the Cedar Lee Theatre and Capitol Theatre are critical assets to Clevelanders who are passionate about cinema. We hope that patrons come out to show their support for these and other independent films playing on Art House Theater Day.”
Regular admission rates apply to Art House Theater Day films. Matinee shows will be $6.75. Evening shows are $9.50 for Adults, $8.50 for Students and $6.50 for Children and Seniors.
Additional titles and times will be available on clevelandcinemas.com for Art House Theater Day starting Tuesday, September 20th once bookings for that week are finalized.
To see the complete list of participating theaters & for more info visit arthousetheaterday.org.
Posted by Bob Ignizio at 12:00 AM