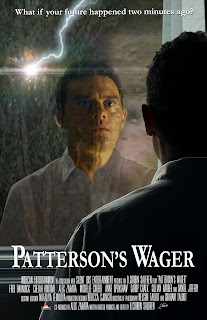 The Canadian feature film Patterson’s Wager will have its Ohio premiere at the 21st Indie Gathering International Film Festival on Saturday, August 13th, at 5:50 PM in Screening Room A at the Clarion Inn and Conference Center (6625 Dean Memorial Parkway, Hudson, Ohio).

Patterson’s Wager is a charming, romantic comedy that stars Fred Ewanuick (Corner Gas) as a man who discovers that he has the unpredictable ability to see two minutes into the future. In addition to Ewanuick, the stellar cast of talented Vancouver actors includes Chelah Horsdal (Hell on Wheels), Alex Zahara (Once Upon a Time), Michelle Creber (Strange Empire), Anne Openshaw (The Grey), and Garry Chalk (AMC’s The Killing).


The film – which was filmed over 12 days in Vancouver, BC - was written, directed, produced, edited, and entirely self-financed by O. Corbin Saleken. It is Saleken’s first feature film. The creative team includes acclaimed directors of photography Nelson Talbot and Graham Talbot (Lawrence & Holloman) - who recently garnered wide-spread media attention for their “When Pigs Fly” Doritos’s commercial, which aired during the 2015 Super Bowl - production designer Rebecca Sjonger, and costume designer Nataliya Fedulova. In addition to acting in the film, Saleken’s long-time friend and frequent collaborator Alex Zahara also co-produced.

“I am very excited to be screening Patterson’s Wager at the Indie Gathering Film Festival,” says Saleken. “I’ve never been to Ohio, so I’m really looking forward to visiting the festival and the state, and seeing how the local audience reacts to the movie.”