Yarn (July 23rd and 24th at the Nightlight Cinema in Akron) 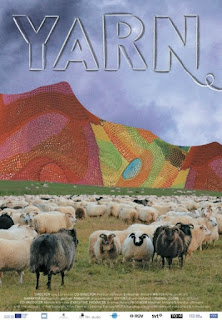 YARN is the real-life global story of art, sheep and fuzzy string. But mostly it’s about people.

The fascinating study, which debuted at SXSW from Icelandic filmmaker Una Lorenzen, is a colorful treat for the crafty or the curious among us. Since I aspire to be both crafty and curious, I’ll admit to being predisposed to appreciate this documentary. That said, I think this film really does have a captivating and rosy quality that everyone can appreciate.

There are four featured artists in the story, practicing yarn art in different ways and in different countries (Iceland, Poland, Japan and Denmark). But their inspirations and motivations have a lot in common.

For example, family ties – a textile sculptor from Japan and a yarn graffiti artist from Iceland both acknowledge the women in their families for teaching them knitting skills. Or motivation for life, both the graffiti artist and an artistic director at a circus theater company described their art as a metaphor for life. The artists make political statements, and they use their art to connect with people.

The artists also described the sexism they experienced in the art world, and described the way their art brings a warm, feminine touch to the world. Based on the fact that all of the featured artists are women, I took this connecting thread to be more of an overarching theme of feminism in the yarn art world.

The actual yarn featured in YARN is in the artwork, ranging from “graffiti” yarn on light posts and walls to woven playgrounds for children. The art from each artist is something to behold, a super bright backdrop to the human narrative.

Big shout out to the narrator, Barbara Kingsolver, who is amazing. The voice of Kingsolver, a decorated American writer, is a warm blanket and her words (based on her original prose, “Where It Begins”) are so on point. When she described a sheep’s pasture as “tart green blades of eternal breakfast,” I think my heart skipped a beat.

After an hour, the overt heroism of yarn art starts to feel exaggerated and a little bit fabricated – yarn pun! – but I was still happy to explore with these artists. And I suppose there wouldn’t be a YARN movie without honest belief on behalf of the artists that there was a greater purpose to their craft, so I can’t criticize too harshly. 3 out of 4 stars.
Posted by Candice Lee at 12:24 AM