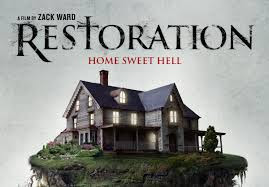 A few weeks ago Tom Hanks made international headlines by being seeing hanging around Lakewood, Ohio, as he visited with friends and in-laws. Yes, some quite ordinary mortals got to see Tom Hanks, in person. But you probably weren’t among them, were you? You didn’t get the heads-up, and thus missed the chance of a lifetime to bask among reflected Hollywood glory, thus uplifting your own dull, pathetic life. You loser.

There is one chance for redemption. No, the Cleveland Movie Blog cannot bring you face to face with Tom Hanks this week; that ship’s left port long ago. But, as a consolation prize, you can share an auditorium with Zack Ward and the team from RESTORATION.

No, not Robert Downey Jr., Hugh Grant, Meg Ryan and others from the 1994 historical drama of the same title. This RESTORATION is a Canadian horror film from Zack Ward’s micro-cinema production company. If the name Zack Ward rings a bell for you, congratulations on your CHRISTMAS STORY knowledge.

As a child actor, Ward portrayed the bully Scut Farkas, Ralphie’s nemesis. He has gone on to a number of adult roles, but here makes his directorial debut, with a tale of a young couple whose efforts to renovate an old home stir up an angry ghost.

Besides the obvious Cleveland CHRISTMAS STORY connection, Ward is partnered in promoting his film with the locally based companies Fresh Squeezed Minds and Skulltimate,  the latter a purveyor of skull-themed jewelry and metalwork.

Come to the screenings of RESTORATION on Sunday, July 10, at 4 p.m. and 7 p.m., and not only see the feature and enjoy a creator Q&A, but take part in prize drawings for Skulltimate gear and the most prized CHRISTMAS STORY tie-in ever, a Scut Farkas coonskin-cap belt buckle.