[THE MUSIC OF STRANGERS opens in Cleveland on Friday July 8th exclusively at the Cedar Lee Theatre.] 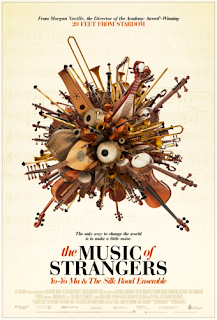 Yo-Yo Ma, the celebrated cellist, does not like to travel, though his career has found him on the road for most of the last 35 years. “I used to throw up before every trip, I was so anxious, so paralyzed,” he says in the documentary THE MUSIC OF STRANGERS: YO-YO MA AND THE SILK ROAD ENSEMBLE . The camera shows him reacting backstage to a fulsome introduction that promises Ma will answer questions after the performance. “Questions? Oh no,” he mutters.


The film contains many such introspective moments belying Ma's ebullient “Sesame Street” persona. Directed by Morgan Neville, the film's titular subject is the wildly successful world-music collective Ma assembled in 2000. But it is more than a celebration of multicultural musicmaking. Like Neville's 20 FEET FROM STARDOM, which profiled undersung rock-music backup singers, it is also an exploration of the difficulties of a life dedicated to music.

Ma, born to Chinese musician parents in Paris in 1955, was a child prodigy who began performing at age 5 and played for Presidents Eisenhower and Kennedy at age 7, and at 8 performed on television in a concert conducted by Leonard Bernstein, who is seen in the film marveling at this very young “Chinese cellist playing old French music.”


Growing up a child prodigy often felt confining.“You grow up with something, you have no choice,” says Ma. “I never committed to being a musician; I fell into it.” The predetermined path left him with a certain hunger, a cultural wanderlust. “I'm always trying to figure out who I am, and how I fit in the world.” Ma has been described as musically “omnivorous,” his versatility embracing film scores, American bluegrass, traditional Chinese melodies, Argentinian tango, collaborations with Bobby McFerrin and the founding of Silk Road Ensemble, named for the famous network of trade routes. “We scoured from Venice to Istanbul to Central Asia, China and Mongolia,” he explains, “looking for incredible talent.” The project also includes an educational program for middle-school students in the U.S.


Amid the joyous music performed in the film runs a thread of melancholy as Silk Road's extraordinary musicians talk about leaving their homelands, the challenges of assimilation, and their efforts to help war-torn home countries and preserve their native countries' traditional music. Wu Man, the extraordinary virtuoso of the Chinese pipa (a four-stringed lute), describes her upbringing during the Chinese Cultural Revolution. “We had no information about Western culture,” she says, until a master class with violinist Isaac Stern “opened a door to me.” The idea of playing in an American orchestra captured her imagination and brought her to New York. Her first years in the U.S. Were “very difficult,” and more latterly she realized, as do many émigrés, that you can't go home again. “In America, people think you're Chinese,” she says. “When you go back to China, they say, 'You're an American, you don't know today's China.'”


Iranian-born musician Kayhan Kalhor echoes this lament. “You leave your home country, you have a picture in your mind. When you go back, everything's changed, the people are even speaking differently.” For Kalhor, a master of the Kamahcheh (a stringed instrument), a composer and specialist in Kurdish and Iranian traditional music, homesickness is particularly acute. His parents sent him away from the turmoil of the Revolution at age 17, and at the time of the film's interview, he had not been back for five years. “I miss my wife, I miss my homeland,” he laments, making a Turkish airport reunion with her late in the film particularly sweet.

Political turmoil also haunts Syrian clarinetist Kinan Azmeh, who wonders about the limits of music to heal humanity. “Can music stop a bullet? Feed someone who is hungry? Of course it can't.” We see him packing flutes into a suitcase — “smuggling, but for a good cause” — as he prepares to teach music to children in a refugee camp in Jordan.

A discerning listener can easily tire of the limited musical menu in American and European concert halls, dominated by Mozart and the “three B's” (Bach, Beethoven and Brahms). The wildness, freedom and unusual sonorities of indigenous music — an exuberant ensemble in Shaanxi Province in China, Wu Man wailing on the Pipa, the virtuosity of Cristina Pato of Galicia, Spain, known as “the Jimi Hendrix of the bagpipe” — can be transformative. For Yo-Yo Ma, who might understandably chafe against playing yet another Bach suite, exploring the globe musically was anodyne. “Away from music, from a single repertoire,” says the cellist's son, Nicholas, “he found himself home again.” 3 1/2 out of 4 stars.