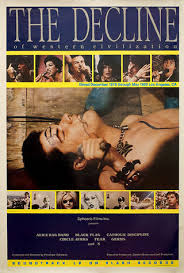 In 1981, this famous look at the American west-coast punk-rock musical underground was an eye-opener in those halcyon, post-disco days of Olivia Newton-John and the Bee Gees. Fights broke out frequently at screenings (imagine that; today people would only be shot). Shock-rockers of later years may have raised the bar of ridiculous indulgence and post-adolescent nihilism (or, if you're a fan, heroic revolt against yuppie consumerism), but there's historical import here for those interested in the time period. Or the mere concept of musicians who don't seem to care about Billboard charts or Red Bull sponsorship.

Ron Reyes, the frontman of Black Flag before Henry Rollins came along, shows us the spray-painted closet where he lives for only $16 per month. Exene Cervenka, back when she was still dwelling in domestic bliss with fellow X member John Doe, displays her collection of fire-and-brimstone Christian evangelical tracts picked up off the streets of LA. Staff of the essential punk journal Slash assemble an issue, despite the typesetter complaining about all the cigarette burns on the pages (thanks to desktop PC publishing not a problem much anymore).

Big record deals, fame, glory, MTV and `street teams' never come up in conversation. But finding a corpse unexpectedly in your yard does. One of the journos, outspoken and provocative-yet-annoying French guy Claude Bessey, AKA Kickboy, fronts his own group Catholic Discipline, and articulates some of the punk philosophy better than the native English-speakers.

I would hope that Ms. Spheeris has a few more DECLINE OF WESTERN CIVILIZATION pictures in her, but the fact is that the veritable cellblock-ful of raw, nasty gangsta-rap-umentaries and hip-hop behind-the-scenes that came after are pretty much in the same tradition, the ghetto unwed-mother offspring of 1981’s original DECLINE. Whether they know it or not. (3 ¼ out of 4 stars)