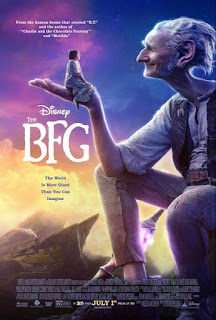 There's an old saying – can't see the forest for the trees. When a critic is in critic mode, there's always the risk of that happening. Of course it's our job to focus on the details, but sometimes in doing so we lose sight of the bigger picture.

Take THE BFG. It tells the story of Sophie (Ruby Barnhill), an orphan girl who gets swept off into a world of adventure when a giant happens to notice her noticing him as he makes his late night rounds. I found it to be an okay kid's fantasy film, but a bit padded and, while not derivative, it still felt more than a bit familiar.

My five-year-old son, on the other hand, asked if there were some way he could go into the movie. Clearly there was some kind of movie magic at work here. It may not have affected me, but I can't deny the power it had on its target audience.


At the same time, though, I also can't deny that I felt lukewarm towards the film. I'm in my 40s, and I've seen an awful lot of juvenile fantasy films in my time. This one reunites director Steven Spielberg and screenwriter Melissa Mathison, the team responsible for E.T.: THE EXTRATERRESTRIAL, to adapt a story by Roald Dahl, author of 'Charlie and the Chocoloate Factory', 'Matilda', and 'James and the Giant Peach'. This does not rise to the level of those aforementioned works. There are some spectacular fart jokes, at least. Middle age hasn't robbed me of finding humor in extreme flatulence yet.

Spielberg's direction is solid as you'd expect, but it would have helped the film if he had tightened it up a bit. 117 minutes is far too long for so slight a tale. Ruby Barnhill is fine as Sophie, but as written, her character didn't resonate with me. Mark Rylance (BRIDGE OF SPIES) voices BFG, and Jemaine Clement (WHAT WE DO IN THE SHADOWS) provides the dialogue for villainous giant Fleshlumpeater, but neither performance is likely to lodge itself in my long term memory. Both actors seem game, but again, they just don't have a whole lot to work with, and the creepy, "uncanny valley" CGI that brings their characters to screen life doesn't help.