Shouldn’t Trump have accepted the nomination here as well? MonsterFestMania, July 29 and 30 in Akron 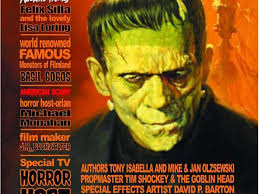 San Diego Comic-con is in full swing right now. But if you are reading this, you're probably not there. You're probably still stuck in the Cleveland area, with your own lonely action-figure collection and Hollywood fantasy/sci-fi/horror discs, and VHS tapes. Airfare to San Diego Comic-Con is quite outside your budget - not to mention admission at the door. You probably can barely afford to leave your parents' basement where you've been living for the last 30 years, like a forgotten Ariel Castro hostage in a state of Rust Belt permanent-recession squalor and minimum-wage poverty. A life in which the louche thrills of scary movies and canonical Bela Lugosi/Boris Karloff B-programmers emceed by Big Chuck were the only reliable escape.


No, even if you did sell a kidney or something to get money, San Diego Comic-Con would probably turn you away at the door anyway, just for being a homely Ohioan, not worthy of entry in a southern California public event. That Wonder Woman cosplay outfit is not fooling anybody.


But wait! There is a ray of hope for lonely genre fans here in flyover-land, and it resides in Akron.

Its a spinoff of the Akron Comic-Con. MonsterFestMania is a nostalgic fan convention and appreciation of vintage late-nite creature-feature culture, exemplified by Ghoulardi and his durable heir apparent in the Akron-Canton marketplace, Son of Ghoul.


The Son of Ghoul  marking an incredible four decades on continuous duty in the horror-host biz - will be just one of the VIPs visiting for the weekend (and none of those annoying communist protesters that made the RNC in Cleveland a bloodbath). Other visitors include original TV Addams Family cast members Lisa Loring (Wednesday Addams) and Felix Silla (Cousin Itt).


For more information go to http://www.monsterfestmania.com.
Posted by Charles Cassady Jr. at 2:42 AM