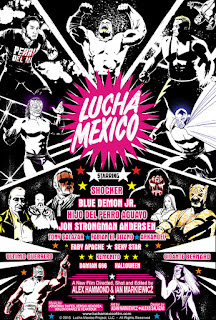 It's always fascinating to me when a documentary takes an unexpected turn. That's certainly the case in filmmakers Alex Hammond and Ian Markiewicz' LUCHA MEXICO. In this case, the turn proved tragic for two of the film's subjects who died during filming. Another two subjects given less screen time evidently passed away before the film was edited and released, as well. To preserve the film's impact, that's all the details I'll give. Regardless, it goes to underscore that wrestling, whether in Mexico or the U.S.A., may be scripted and choreographed, but it's still an extremely dangerous profession. And not all of the danger is in the ring.

Those hoping for a little historical context of lucha libre (a distinctly Mexican variety of pro wrestling that often involves masks, extremely agile and acrobatic moves, and often politically incorrect aspects such as little people working as comic relief wrestlers/mascots) will be largely disappointed. Famous pioneers of the style such as El Santo and the original Blue Demon, both of whom starred in hugely popular film series where they battled such villains as Dracula, Frankenstein's monster, and Mexico's own supernatural threat, La Llalorona, are mentioned, but only briefly. Nor is the cultural impact of the sport in Mexico, which is far greater than in the United States, delved into as deeply as one might hope.

Instead, the film focuses on the individual stories of various contemporary wrestlers, chief among them second generation grappler Shocker "El 1000% Gaupo" (1000% Handsome) – real name Jair Soria Reyna. We also spend a fair amount of time with Jon "Strongman" Anderson, an American who frequently wrestles south of the border, often teaming with Shocker. Both of them work out at the gym owned by masked wrestler Fabian "El Gitano". These wrestlers, along with Blue Demon Jr. and others, represent the more traditional style of Mexican wrestling under the banner of the CMLL. El Hijo Del Perro Aguayo and his Los Perros del Mal troop started out with CMLL, but eventually started his own wrestling organization more in line with the more violent "extreme" wrestling style exemplified by America's ECW.

There may be enough drama here for the film to hold the interest of some non-fans. But given the dearth of historical context, and what feels like an assumption by the filmmakers that anyone watching this film already knows the basics, it's far more likely to appeal to hardcore lucha afficianados. If that sounds like you, you can probably add another half a star to my rating. For everyone else... 2 ½ out of 4 stars.
Posted by Bob Ignizio at 5:08 PM