Life, Animated (opens in Cleveland 7/22 at the Cedar Lee Theatre) 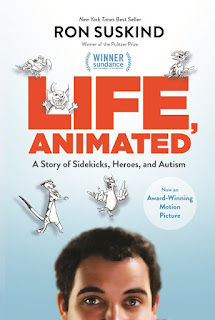 A good documentary can often feel more rewarding than a scripted film. There’s a sense of voyeurism when looking in on a life or subject you’d never get to see otherwise. Where every moment of a major motion picture is scripted and edited to perfection, a powerful documentary is spontaneous, real, and informative. LIFE, ANIMATED is all of those things and more. It is a celebration of film and those who love film. It is the celebration of autism and those incredible people who overcome the limitations of a disability.

LIFE, ANIMATED, from Academy Award winning director Roger Ross Williams, is the story of Owen Suskind and his family. At the age of 3, Owen’s parents, Ron and Cornelia, noticed his declining ability to communicate and other characteristics that seemed more in line with regression than progression for a young child. Rather quickly, Owen is diagnosed with regressive autism. Today’s society is more educated and sensitive to autism but in the early 90’s, Owen’s parents and the public had less to go on. His parents and his brother, Walter, had to find their own path to reaching Owen, and his is indeed a unique journey.

It should be noted that Owen’s dad Ron is a pretty unique guy. Ron Suskind is a Pulitzer Prize winning journalist and best selling author (covering everything from his son’s story to presidential administrations). His mother Cornelia is part of the famed Kennedy family. The movie doesn’t focus a whole lot on their histories, but certainly Owen benefits from parents who are extremely successful and dedicated. As any parent would understand, Ron and Cornelia’s lives are turned upside down when they realize they can no longer get through to their young son. We watch as his school and classmates reject Owen, outcast due to societies lack of knowledge regarding regressive autism. Struggling to connect to the world, Owen finds refuge in movies, particularly animated Disney movies. He simply can’t get enough of the VHS Disney classics, watching and re-watching again and again.

In one of the most powerful scenes, Ron Suskind makes a breakthrough one night when he decides to sneak into Owen’s room. Ron uses an Iago puppet (the Gilbert Gottfried-voiced parrot from ALADDIN) to speak to his son. Imitating Gottfried’s distinctive voice, he pretends to be the silly parrot and for the first time his son Owen has a conversation with his father (if you’re a crier, this film will induce tears).

His family begins to understand that Owen sees the world through his beloved Disney movies and characters. He understands love through THE LITTLE MERMAID and ALADDIN, heartache through BAMBI, bravery through THE LION KING, new beginnings in DUMBO, and overcoming the odds in THE BEAUTY IN THE BEAST and THE HUNCHBACK OF NOTRE DAME.

Owen can quote and imitate any Disney film. Disney serves as the lens to Owen’s world. LIFE not only documents Owen’s journey to present day but it also offers fascinating and beautifully animated sequences of a story Owen has created himself. In these animated sequences Owen joins up with Disney sidekicks. As his father notes, it’s not the Disney heroes that Owen feels kinship with, but the sidekicks. The sidekicks are the ones who support and make the hero’s goal achievable, they give meaning to the story.

Owen’s story should be one of inspiration for many people. It’s inspiration for parents who may have a child with a disability or for those overcoming autism. LIFE should be an inspiration for those who have no idea what autism is or what it’s like to have it. Like any Disney journey, Owen must find his own path. We see Owen deal with having a girlfriend and the heartache associated with that. We watch as Owen strikes out on his own, managing his own apartment. His search for a job. His transformation into a spokesman for autism and, in one of the funniest scenes, we watch his brother Walter try to painfully broach the topic of sex with Owen. With so many aspects of Owen’s life introduced, by the films end, it feels a bit incomplete. LIFE doesn’t really have time to wrap up each lose end, perhaps its only major flaw.

To its credit, LIFE avoids becoming a commercial for Disney. A central theme is the power of film; in this case it just happens to be Disney films. Films are a vital part of fulfilling many people’s lives, including my own, whether it’s an escape or getting to appreciate a medium which allows for new creations of art on a weekly basis. Film has the power to add enjoyment to people’s lives, to change lives, and in Owen’s case, perhaps even save a life. 3 1/2 out of 4 stars

Posted by Joseph Anthony at 1:10 AM