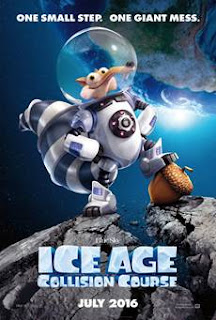 There's also a nut crazed squirrel, Scrat (Chris Wedge), whose pursuit of his favorite food sets off a chain reaction that sends a deadly meteor hurtling towards earth. Buck has found a prophecy showing this same meteor was responsible for wiping out (most of) the dinosaurs, and is destined to do the same thing to the mammals. He reasons there may be a way to stop this from happening, but they'll have to travel to the crash site of the previous meteorite to find their answers. A family of mammal-hating birdlike dinosaurs led by patriarch Gavin (Nick Offerman) follow, hoping to sabotage the mammals plans in the belief that they will survive the catastrophe because they can fly, and will become the new rules of the earth once the furry creatures are vaporized. All this is given narration by astronomer Neil deBuck Weasel (Neil deGrasse Tyson). Oh yeah, there's also a whole bunch of other characters living inside the old asteroid, which they call Geotopia, including sloth Brooke (Jessie J), rabbit Teddy (Michael Strahan), and the Shangri-Llama (Jesse Tyler Ferguson). And people said BATMAN V. SUPERMAN was overstuffed with characters.

The bits involving Scrat would make for a reasonably funny short cartoon in the classic Warner Brothers/MGM vein. And hey, what do you know, it already has. Most of this material was released last year as "Cosmic Scrat-tastrophe" which showed before the PEANUTS feature film. As for the rest of COLLISION COURSE, it's depressingly by the numbers kid-flick stuff, with the obligatory subplots about Mannie coming to terms with the fact that his daughter Peaches is going to be marrying Julian and moving out, Diego and Shira learning that they just might make good parents after all, and the unlucky at love Sid finding a possible soul mate in Brooke.

You really can't call this film anything other than product. We're well past the point that these things should have been sent straight to video, where they might have one day caught up with THE LAND BEFORE TIME's even more shocking 14(!) entries. But I guess somehow this series keeps making enough money to warrant playing on the big screen. Take the kids to see FINDING DORY or THE SECRET LIFE OF PETS again, instead. 1 out of 4 stars.
Posted by Bob Ignizio at 12:19 AM