[HUNT FOR THE WILDERPEOPLE opens in Cleveland on Friday July 15th exclusively at the Cedar Lee Theatre.] 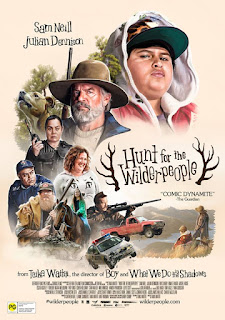 Based on a novel by Barry Crump, Taika Waititi's HUNT FOR THE WILDERPEOPLE is a slightly offbeat kid's adventure tale set in the New Zealand bush. The filmmaking is relatively straightforward, with only the affectation of chapter titles giving it any sort of artsy flourishes, and the story is easily relatable despite the different culture. If this were the seventies, it would be playing in mainstream theatres and might have had a chance at being a modest success.

These days, sadly, a movie like this is relegated to the arthouse circuit (no offense to arthouses intended). There it will be lucky to get more than a week-long run before heading to home video where it can easily get lost in the sea of crappy straight to video releases. Although in this case, it's already on VOD simultaneously with its theatrical release, so even if you don't want to leave the house in 90 degree heat, you can sit on your ass and watch it on TV. Either way, if you're overdosed on big budget summer blockbusters and hungry for something a little different, hopefully I can persuade you to give HUNT FOR THE WILDERPEOPLE your time and money.

The plot concerns Ricky Baker (Julian Dennison), a problem child in the New Zealand foster system. He's escaped from several previous homes, committing various petty crimes along the way. When he's placed with Bella and her husband Hec (Sam Neil), it's his last chance. Fortunately, he seems to have found a place where he fits in. Then Bella (Rima Te Wiatta) dies, and The Department of Child Welfare decides to take the boy back.

This doesn't sit well with Ricky, who sloppily fakes his death by fire (and burns down Hec's barn in the process) before running away into the bush with his loyal dog and no clue of how to survive. Hec finds Ricky and intends to take him back to the authorities. When Hec fractures his foot, though, the two are forced to work together to survive until the injury heals. By that time, though, the authorities assume that Hec has kidnapped the boy, making him a fugitive. Things are further complicated when an encounter with some locals at a hunting lodge leads to further (unfounded) suspicions of criminal activity by Hector.

And so the two outlaws vanish into the bush, surviving on wild game and stolen supplies. Along the way Hec manages to impart some of his considerable knowledge of forestcraft to Ricky. But as the hunt intensifies, evading capture becomes more and more difficult.

You can tell this is a film made without studio interference. There are some rough spots, idiosyncrasies, and uncomfortable plot points that would never have made it past a Hollywood focus group. Thank goodness. So even though the basic plot is one we've seen before, the path HUNT FOR THE WILDERPEOPLE takes in reaching its conclusion is its own.

Of course the cinematography is beautiful. Anyone who has seen the LORD OF THE RINGS movies knows the New Zealand wilderness is gorgeous. But this isn't a movie about scenery; it's about two wounded characters finding a connection. Both Neil and Dennison do an excellent job showing the slow, cautious building of trust, and how fragile that can be at times. Rachel House as Paula, the Child Welfare agent intent on capturing Ricky, is perhaps the one discordant note. She plays her one-dimensional villain in a distractingly over-the-top fashion (and I blame the writing more than her performance), but fortunately she isn't in the film much.

The over-the-top tone of House's character also infects the film's climax, which includes a gratuitous police car crash that feels more like it came out of a SMOKEY AND THE BANDIT movie than a little Kiwi family film. But again, it's these kind of odd choices and rough edges that come with letting a filmmaker do things their way without much, if any, interference. When it comes to the meat of the story, as well as its quieter digressions, director Waititi is spot on, showing the same gift for subtle comedy and getting into the souls of his characters that he displayed in last year's very different WHAT WE DO IN THE SHADOWS. HUNT FOR THE WILDERPEOPLE may be a slightly flawed film, but it's also the kind of film that's likely to make a real and lasting impression on those who see it. 3 out of 4 stars.
Posted by Bob Ignizio at 11:52 AM